Researchers in the Czech Republic have shown that an unusual class of boron-containing compound can inhibit HIV protease, a key enzyme involved in replicating the virus that causes Aids. The finding is potentially signficant because the compounds - metallacarboranes - attack the enzyme in a different way to most existing drugs and could help overcome problems of resistance.

Carboranes are polyhedral cages composed of carbon and boron atoms. The cages can be paired through a metal ion - in this case cobalt - to form metallacarboranes. Pavl?na Rez?cov?, of the Academy of Sciences in Prague, and her colleagues linked two of these pairs together using a short chain with a quaternary amine in the centre. They made a range of these compounds with different substituents attached to the quaternary amine, and tested their effect on HIV protease in the test tube.

The team found that significant inhibition of the enzyme could be achieved - with varying degrees of potency depending on the nature of the substituent groups on the amine. Importantly the compounds also inhibited variants of the enzyme that had developed resistance to existing treatments.

X-ray crystallography of the inhibitor binding to the enzyme showed that the while the molecules were occupying the enzyme’s active site, the same as existing drugs and the natural peptide, the metallacarborane cages additionally interfered with other key parts of the enzyme’s structure. 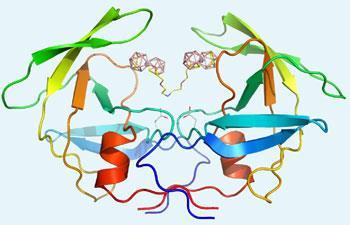 X-ray structure of how the compounds bind to HIV protease

Based on these findings Rez?cov? believes that metallacarboranes are worth pursuing as HIV protease inhibitors. ’Their chemical and biological stability, low toxicity, and the possibility to introduce heteroatoms into the cage or polar group modifications to the side chains make boron clusters very attractive pharmacophores for development of potent HIV protease inhibitors,’ she says. ’In our future work we will address the issue of optimal size and flexibility of the linker and also focus our optimisation effort on improving physico-chemical properties of the compounds to increase solubility and prevent aggregation.’

Celia Schiffer, a structural biologist at the University of Massachusetts in the US with intimate knowledge of HIV protease, says that while the metallacarboranes are weak in comparison to the therapeutically used HIV protease inhibitors, the pattern of their binding with highly resistant HIV protease variants ’warrants a careful examination’. Schiffer adds, ’the way that these compounds fit in the active site is fascinating and the work certainly points up new areas of thought.’
Simon Hadlington