Boron clusters turn titanium oxide to the dark side

US researchers have expanded the capabilities of the key light-harvesting material titanium dioxide by eliminating the very property that makes it most recognisable – its bright white colouring. Alexander Spokoyny at the University of California Los Angeles (UCLA) and his colleagues have combined titanium dioxide with boron clusters in a high-temperature process he says may be unique.

‘Any organic molecule would get destroyed,’ Spokoyny tells Chemistry World. ‘Because these boron clusters are so robust you can carry them through 500˚C annealing in air and they remain in a network of whatever metal oxide forms. That’s really unprecedented.’

Spokoyny’s PhD student Dahee Jung was studying ‘hedgehog-like’ clusters of twelve interlinked boron atoms, each with a hydroxyl group protruding outwards, seeking to join metas atoms to the hydroxyl groups. Jung reacted the boron clusters with titanium isopropoxide, a standard precursor that produces titanium oxide through a high-temperature annealing process. The titanium isopropoxide-tipped hedgehog she made came in the form of a gel with which she could then produce a black solid material through annealing in air at 500˚C. 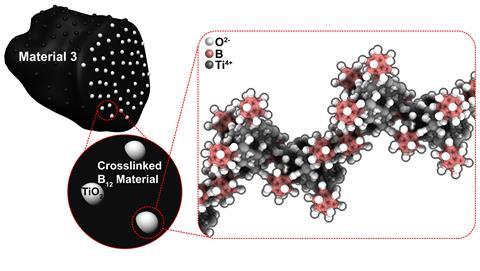 Electrons can move four times faster through the resulting black powder than standard titanium dioxide because the boron clusters share electrons in three dimensions. To exploit this, Jung, Spokoyny and their colleagues produced a prototype supercapacitor and showed that the new material worked as a photocatalyst that could also degrade organic molecules. This could be useful for cleaning up water contaminants, especially because the now-black material absorbs visible light.

‘We can shine red LEDs like you buy for $5 and you can see pretty efficient photodegradation of these materials,’ Spokoyny says. The new boron-modified material is also more robust than conventional titanium dioxide, with ‘amazing stability towards degradation in all sorts of harsh media including bases, hard acids, you name it’, he adds. ‘We actually had a really hard time dissolving this material in anything.’

Suze Kundu from the University of Surrey calls the study ‘a great example of some of the progress made in terms of combining robustness of a material with more optimal photophysical and electrochemical performance’. She says it’s a ‘beautiful’ case of ‘two materials, limited in their abilities, combining to give rise to material properties better than the individual components’.