Chinese researchers have combined two organic materials to create branched organic nanowire heterojunctions for the first time. The tree-like structures emit various wavelengths of light when excited by laser and could be useful for developing optoelectronic circuits and devices for computing and information processing.

Although nanowire heterojunctions have previously been made and incorporated into nanoscale photonic devices, they have only been synthesised from inorganic compounds. Organic materials have shown promise for optoelectronic applications, including photovoltaics and organic LED displays, particularly because they are more stable and cheaper to make than inorganic based systems and have promising optical properties that could faciliate even smaller optical devices. 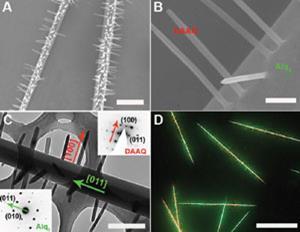 Now, Yong Sheng Zhao and colleagues at the Chinese Academy of Sciences in Beijing have developed a two step process to create dendritic heterojunctions using only organic components. ’The heterostructures can be fine tuned with high efficiency. And thanks to such a facile method, it is very suitable for production on a large scale,’ says Zhao.

The structures comprise two organic dyes that have been widely used in organic optoelectronic devices: aluminium tri(8-quinolinolate), commonly known as ALQ3, and 1,5-diaminoanthraquinone (DAAQ). The team first made ALQ3 microwire trunks dispersed onto silicon and quartz wafers, which acted as the substrates for the growth of the DAAQ nanowires. The ALQ3 microwires play the role of condensation nuclei to help the precipitation of DAAQ.

’Dendritic systems offer a large surface area, and so you could get more light out or in, a bit like the dye sensitised solar cell in principle,’ says Steve Dunn who investigates nanomaterials chemistry at Queen Mary University of London, UK. He adds that the approach could lead the way in developing ’a new brand of systems’ for organic photovoltaic devices and LEDs.’

’In the future, we plan to integrate such nanowire heterojunctions into nanoscale optical and electrical devices, circuits and networks,’ says Zhao. ’Furthermore, we intend to exploit multiple-input and multiple-output optical channels, which can serve as efficient splitters, switchers and multiplexers in future photonic networks designed for computing and information processing.’