The bonds between alkyl carbon and fluorine atoms are notoriously tough to break - could an iridium complex be the answer?

US chemists have discovered a new way to break the bond between carbon and fluorine atoms - the strongest carbon bond there is. The reaction, which is mediated by an iridium complex and proceeds in an unexpected way, is important because many pharmaceuticals and agrichemicals incorporate C-F bonds. The research suggests possible routes for the development of new catalysts to promote reactions that make or break C-F bonds. 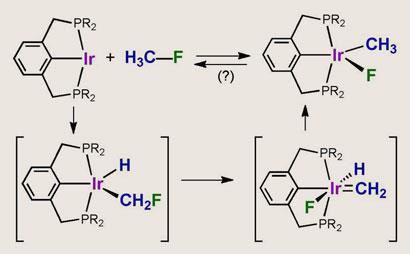 Bonds between fluorine and carbon atoms in aromatic rings or with double-bonds can be made and broken by using oxidative addition mediated by transition metals. But this approach has failed with the kinetically less reactive bond between fluorine and alkyl carbon atoms. Now, researchers at Rutgers University in New Jersey have cracked the problem by using a catalyst based on an iridium centre clamped between two bulky dialkylphosphino groups - a so-called pincer-ligated complex.

The research team had previously shown that similar catalysts attacked C-O bonds in an unusual way. ’The metal centre first attacks the C-H bond, which is oxidatively added, with the oxygen then migrating from the carbon to the metal and the hydrogen returning to the carbon,’ says team member Alan Goldman. ’With that in mind we wondered if something similar might happen with a C-F bond, and to our pleasant surprise it did.’

As the carbon approaches the complex, the metal centre inserts itself into a C-H bond. The fluorine then migrates to the metal, with the displaced hydrogen returning to the carbon. ’At first sight it looks as though the hydrogen never left and that the iridium inserted itself directly into the C-F bond,’ says Goldman. ’But this is not the case, and I do not think anyone would have anticipated how the reaction proceeds.’

Goldman adds: ’What I think we have done is provide an important piece of information which could help people to design new catalysts for making and breaking this type of C-F bond.’

Mike Whittlesey, who researches C-F bond activation at the University of Bath, UK, says: ’While significant progress has been made in activating sp2 hybridised C-F bonds, activation of aliphatic C-F bonds has been performed on exceptionally few occasions and then not with the very simplest substrates reported here, fluoromethane and trifluoromethane. Furthermore, the strong track record of the types of pincer metal complexes that Goldman has employed raises the real possibility of being able to utilise the stoichiometric chemistry he has now described for the development of catalytic C-F functionalisation reactions - a very exciting prospect.’