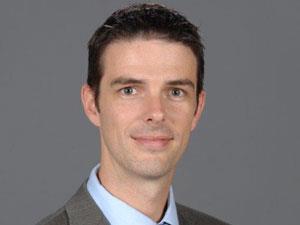 Brent Sumerlin is professor of chemistry at the University of Florida in Gainesville, US. His research concerns the identification, synthesis, and characterisation of smart polymers.

How would you describe your work?

We are synthetic polymer chemists and all of the materials we’re interested in are smart materials. They’re not really smart – they can only do one thing – but they do that one thing really well.

Usually they’re block copolymers in solution and they self-assemble or dissociate depending on the conditions around them like pH or temperature. We want to make polymers that respond to their environment and can be useful for things like drug delivery.

Is your work mainly focussed on drug delivery?

Yes, mainly. There are two ways of thinking about it. One would be to specifically release a compound in one environment under a specific set of conditions. Another way to think about it would be to instead encapsulate something under specific conditions. We haven’t done work in that area directly but it is common to use similar materials for, say, wastewater remediation. In both cases you’re trying to encapsulate something hydrophobic, it’s just whether you want to release it or not.

Do you have particular biological targets or problems you want to solve?

Most of our interest has been in the area of diabetes, and I think that’s what sets our work apart from a lot of other smart polymer chemists. Most people are working on cancer but diabetes is also a problem of growing importance. The polymers we work with respond to sugar, and under a high concentration of sugar they become hydrophilic. So if you can make an aggregate that’s held together by these polymers, when there’s a lot of sugar around, they become water-soluble and dissolve, potentially releasing insulin from inside. We like this approach because it combines the glucose monitoring and insulin production into one feedback step.

Would that be an implant or still injectable?

It would still be an injectable system. The Holy Grail would be a formulation you could inhale or swallow – oral delivery would be the best. But so far we’re still focussing on injections because it helps circumvent a lot of potential problems. Trying to administer a protein through the stomach is pretty tough, and because insulin is a protein, you want to bypass that step and get straight to the blood.

And inside the polymer would be a solution of insulin?

Yes, it’d be similar to the solution that would be administered by diabetics already but a little more concentrated so that you could have more insulin in a smaller amount of space. The idea there is that the insulin would only be released with a high concentration of glucose but that it would also have a longer lifetime in the body so you could significantly increase the half-life of insulin compared to just injecting it. If you could get down to once a week injections that’d be great, but the only way you can do that is to make the insulin solution really concentrated otherwise you have to put too much into the body.

I think the more innovative sides of polymer chemistry revolve in these areas of drug delivery and responsive smart materials so I sort of came at it from that direction. In a way, I had a solution in search of a problem. I thought about it from the chemistry point of view. I think that’s what we do a lot of the time, we ask “what can we do with this?”

I knew I wanted to work on smart materials and stimuli responsive materials when I started my independent career but I didn’t want to do the same sort of smart materials that other people had considered. So I was looking for new stimuli for the polymers to respond to and I sort of stumbled onto the area of boronic acid polymers being used for saccharide sensing. Making the extension from sensing to using that sensory event to release something wasn’t too big of a jump.

In 2012 you moved your group from Texas to Florida, how did that go?

It took several months for the move to happen, and it took even longer for us to get settled in. Starting a new lab as a new PI is a slow and gruelling process, but taking an existing lab that is already functioning, completely stopping it, and starting it again can be a frustrating process.

And it’s not just me and my family getting acclimated. Four group members moved with me, some of which had families of their own. It was a complex issue finding your bearings in a new environment. But I think now we’re back up to full speed. My group grew by a factor of five in size in 18 months.

Did you find that growth difficult?

My group had not been that size before, and time and resource management does get tougher past a certain number. There is only so much attention you can devote to each person, and if you divide it equally it’s too little per person. At some point the group has to become increasingly self-sustaining. That’s quite possible, since the bigger the group is the more diverse the set of expertise that leads to people capable of helping one another. So I think that’s probably what we’ll get to, an equilibrium.