US chemists have dramatically shortened the synthesis of byrostatin 16, one of a family of natural products that show promising activity against cancer but can’t easily be extracted from nature or made artificially. The new synthetic route, they say, may help make practical quantities of the compound, and provides clues to improve the synthesis of other related natural products.

Bryostatins were first isolated from coral-like sea creatures called bryozoans, and have been shown to have potent action against various types of cancer. They can also improve cognition and memory in animals, giving them potential to combat Alzheimer’s disease.

But it takes an entire tonne of the marine organism Bugula neritina to isolate just a gram of byrostatin anticancer compounds. And the structure of byrostatin molecules is so complex, built up around three rings densely packed with chemical groups, that syntheses from scratch typically require over 70 reactions, with at least 40 steps in linear sequence - meaning they are impractical for making anything more than milligram quantities of material.

The new route to bryostatin 16, designed by Barry Trost and Guangbin Dong at Stanford University, almost halves the length of previous synthetic efforts, taking the longest linear sequence of reaction steps from 40 to only 26, and using just 39 steps in total.

Trost and Dong’s strategy relies on forming two of bryostatin’s rings late in the synthesis, using ’atom economical’ steps - where every atom present in the starting material is also present in the product. 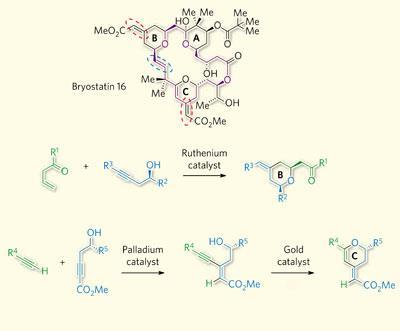 The shortened synthesis to bryostatin 16 included three perfectly atom economical reactions: the B ring was constructed using a ruthenium catalyst, and the C ring with the help of gold and palladium

To make the B-ring, we bring together two large fragments of the molecule in a single ruthenium-catalysed event developed by our group,’ explains Trost. ’This simultaneously makes a pyran ring and an exocyclic double bond containing exactly the geometry required.’   A second reaction to form the C-ring uses a palladium-catalysed reaction, directly followed by a gold-catalysed reaction.

Importantly, says Trost, bryostatin 16 can act as a precursor to several other members of the family, and the synthesis should provide access to many different analogues. ’Bryostatins have certain structural elements that are very pronounced in other kinds of natural product structures,’ he adds. ’The strategy that we have developed here could definitely be applied to other systems.’

The potential of bryostatins as powerful therapies has been illustrated by Paul Wender’s group, also at Stanford University. Due to the shortage of available bryostatin, Wender has been looking into making simplified analogues of bryostatin - some of which have entered early clinical trials. Having readier access to the original bryostatins may provide new insights into improving the design of these simplified compounds, the researchers note.

’Bryostatins are very difficult to get hold of, so improved synthetic methods like this are very useful,’ comments Jim Thomas, who has worked on bryostatin synthesis at the University of Manchester, UK. ’The less waste that accrues from the synthesis, the more viable it is both economically and environmentally.’