Buckyballs give clue to space mystery

Fullerenes have been identified in space, raising the hopes of discoverer Harry Kroto that they hold the answer to a persistent astronomical problem

The C60 molecule Buckminsterfullerene has been clearly identified in space for the first time, providing a possible solution to a 90-year old extraterrestrial enigma. Jan Cami of the University of Western Ontario, Canada, and colleagues have discovered huge clouds of both C60 and C70 in the planetary nebula Tc 1. ’We have lots of evidence that in the interstellar medium there must be very large organic species, but we haven’t previously been able to identify specific fullerene species,’ Cami explains. ’Up to now the largest species identified had 13 carbon atoms.’

The on-board infrared spectrograph on Nasa’s Spitzer Space Telescope provided the data on Tc 1, which is approximately 6,000 light years away, in the southern hemisphere constellation Ara. Cami’s co-author Jeronimo Bernard-Salas, of Cornell University in the US, first noted the unusual emission spectrum. He passed it to Cami and his Western Ontario and Seti Institute colleague Els Peeters for identification, who recognised characteristic Buckminsterfullerene wavelengths. ’For C60, we know that molecules can only have four distinct vibrational features,’ he explains. ’We detected all four of them.’ 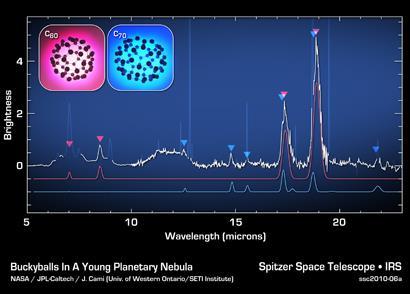 Using data from the infrared spectrograph on board the Spitzer Space Telescope, the team identified spectral features of C60 (indicated in red) and C70 (in blue)

To fully confirm their identification, Cami and his student Sarah Elizabeth Malek developed computational models simulating the conditions that produced the recorded spectrum. As C60 peak wavelengths and band widths are temperature dependent, they could calculate that the relative intensities of the C60 bands corresponded to thermal emission at 330K. The C70 bands were calculated to arise from a 180K excitation temperature. ’I think this is one of the most solid identifications of species that I’ve seen,’ Cami says. Using the same models, the scientists also estimated that the total mass of each fullerene present in the nebula was 1023 kg, or around one and a half times the mass of our moon.

Joining up the dots 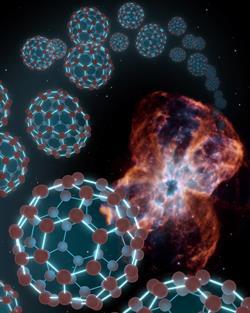 Fullerenes could have been formed in a planetary nebula, and then drifted out into space

These results hark directly back to the experiments that originally identified Buckminsterfullerene, which mimicked the outer atmospheric chemistry of red giant carbon stars. Sir Harry Kroto, who jointly won a Nobel Prize for this discovery in 1996, is excited by the findings’ clarity. ’The spectrum is incredibly convincing,’ the Florida State University academic said. ’I thought I would never be as convinced as I am. The fact that the four lines are there, and C70 is there, is just unbelievable. It’s a spectacular paper.’

The original experiments devised by Kroto and his colleagues Bob Curl and Rick Smalley were intended in part to investigate unexplained absorptions in radiation reaching Earth. Known as diffuse interstellar bands (DIBs), these absorptions were originally observed in 1919 but are still not fully understood. ’The latest surveys have actually found more than 600 of these absorption bands from the near UV to the near infrared, and we just don’t know what is causing them,’ Cami says. ’The cause must be very stable because we see it surviving in the interstellar medium at high abundances. We therefore presume that it must be carbonaceous molecules.’

’C60 is the most robust of all molecules and should be able to survive much better than any other molecular species we know,’ Kroto notes. He has long believed that atoms or ions associated with C60 molecules may expand its four bands to give the 600-plus DIB bands. Because nebulae like Tc 1 contribute to the dust that forms the interstellar medium, he is now more convinced. ’These results make this solution to the DIB problem infinitely more plausible than it seemed the day before I learnt about them.’

Cami studied the DIBs during his Masters degree and hopes that fullerenes will provide an explanation, but doubts that they will do it alone. ’If you list the candidates, you have one-dimensional carbon chains and you have two-dimensional polycyclic aromatic hydrocarbons,’ he says. ’Then you have the three-dimensional solutions, which are the fullerenes. In terms of stability it’s hard to beat the fullerenes, but in the end I feel it will be a little bit of everything.’