Nanotech and synchrotron among victims of UK science budget raid

Scientists and research managers in the UK have reacted with dismay to a ?68 million raid on the budget of the research councils - the state agencies that fund the bulk of civil science research in the country.

The Department of Trade and Industry, which is responsible for the public science budget, reclaimed the money from the councils after it decided to inject extra cash into the nuclear power company British Energy and the now defunct motor car firm MG Rover.

The Engineering and Physical Sciences Research Council (EPSRC), the principal supporter of chemistry research in UK universities, is losing ?29 million from its budget next year - equivalent to four percent of the total. It has announced that it will not award ?14 million of research grants that it had planned to support next year. The remainder of the ?29 million will be found by withdrawal of support for the construction of new beamlines at the national synchrotron radiation source, the cancellation of additional equipment for nanotechnology, a reduction in administration costs and the cancellation of a number of ’IDEAS sandpits’ - intensive workshops that produce innovative ideas for new projects. The council emphasised that it had decided to protect studentships at the expense of research grants.

’Because virtually all of EPSRC’s funds are spent in universities on research grants and post graduate studentships, decisions have inevitably impacted on the seedcorn of the future: innovative research and young people at the start of their research careers,’ said EPSRC’s interim chief executive, Randal Richards. ’In engineering and the physical sciences this is doubly serious because these are shortage subjects that are essential to the economy and much of the rest of science.’

Graham Richards, of the University of Oxford’s chemistry department, told Chemistry World, ’This is bad news for science but multiply so for chemistry where much research depends on teams of people. My department has contributed
some ?80 million to the central university as a result of the creation of spin-out companies: just what the Government desires. Cuts will jeopardise that and damage the delicate perception that there is a real future in careers in research.’

The research council responsible for biological sciences, the BBSRC, lost ?6.7 million and has decided to cut the equivalent of twenty new grants, and reduce its annual competitive funding scheme for new equipment at its sponsored institutes. 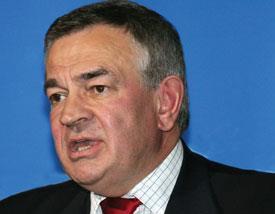 ’We are very disappointed and realise that this reduction will affect individual researchers,’ said Nigel Brown, BBSRC director of science and technology.

The minister for science and innovation, Malcolm Wicks, defended the cuts, describing the resulting cutbacks as ’uncomfortable’ but necessary. This was a ’blip’ in the government’s record investment in science, he added.

Speaking on 13 March at the RSC’s Voice of the Future event at the House of Commons attended by over 200 young scientists from around the country, Wicks also indicated that the research councils had not spent the money and were therefore unlikely to before the end of the financial year.

The Department for Trade and Industry (DTI) was experiencing financial difficulties, he said, adding that ’all organisations have to balance their books.’