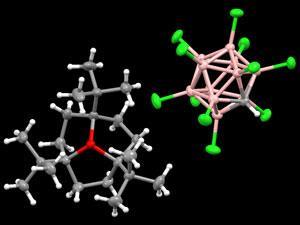 Chemists in the US have stretched the C–O bond to a record length, an ‘extraordinary’ 1.622Å, compared with a typical length of around 1.43Å in ethers. The work not only presents a chemical curiosity, but helps to confirm and contribute to the theoretical understanding of the limits of covalent bonding and the consequences of introducing extreme strain in molecular structures.

The team, led by Mark Mascal at the University of California, Davis, first noticed an unusually long C–O bond four years ago,1 when they synthesised a surprisingly stable compound containing the oxonium ion – a normally short-lived trivalent oxygen cation. The compound, oxatriquinane, consists of the oxonium ion clamped in the centre of a system of three fused five-carbon rings. In this molecule the C–O bond was found to be around 1.54Å.

‘The reason for this bond lengthening is the strained configuration of this puckered ring system,’ says Mascal. This strain prises open normally inaccessible anti-bonding orbitals, allowing electrons to leak in and increase repulsion, pushing the oxygen and carbons apart to an extent that the bond is stretched without snapping.

In the new work,2 Mascal’s group has taken oxatriquinane and substituted hydrogens surrounding the central oxonium ion with successively bulkier groups to introduce steric strain. ‘As these groups increase in size they cause crowding and repel each other,’ Mascal says. ‘This stretches the C–O bonds even further.’ Ultimately, if tert-butyl groups are attached this results in the greatest degree of stretching without the molecule falling apart. ‘The bond stretches to 1.622Å,’ says Mascal. ‘The C–O bond is polar and inherently relatively fragile, so to lengthen it to that extent without breaking it is extraordinary. It's all about pushing the limits of bonding by means of various orbital interactions, strain and steric arguments.’

Peter Schreiner, of Justus Liebig University in Germany, is impressed by the study. Schreiner’s group broke the record for the longest C–C bond last year. ‘This paper shows how alive the questions of chemical bonding and steric interactions are as it pushes the limits for carbon–heteroatom bond lengths,’ Schreiner says. ‘We now begin to appreciate the role dispersion plays in stabilising such highly unusual structures that were deemed impossible not too long ago. I expect the development of new bonding concepts and strategies in catalysis to follow from this and related work.’