Longest carbon–carbon bond yet pushes chemistry to its limits

The longest ever carbon–carbon bond has been created by researchers in Japan.1 At more than 1.8Å, this bond is longer than the maximum possible bond length calculated for certain alkanes and longer than the shortest non-bonding distance2 between two carbon atoms.

‘Looking for structures with particularly long or short bonds is telling us much about our current understanding of chemical bonding,’ says organic chemist Peter Schreiner from the University of Giessen, Germany, who wasn’t involved in the work. Pushing chemical bonds to their limits ‘urges us to keep asking the question: when is a bond a bond?’, he adds.

Since 2011, Schreiner and colleagues held the record for the longest carbon–carbon bond – a 1.7Å alkane bond. Now, a team around Yusuke Ishigaki and Takanori Suzuki from Hokkaido University first computationally designed and then synthesised a compound featuring a bond 0.1Å longer – almost 1.2 times the length of a regular alkane carbon–carbon bond. This makes the dispiro(dibenzocycloheptatriene) derivative the neutral hydrocarbon with the longest single bond in existence. 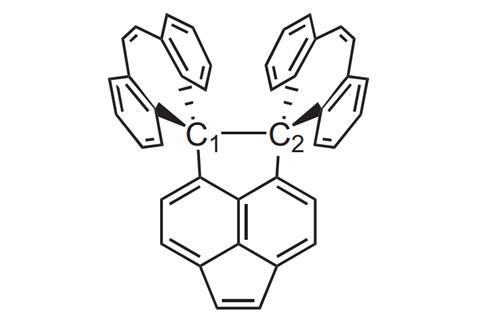 Steric strain from two large groups forced into an eclipsed position pushes the benzylic–benzylic carbon–carbon bond to 1.798Å at –73°C and 1.806Å at 127°C, according to x-ray analysis. Nevertheless, the molecule is stable even in solution as chemically inert aromatic rings protect the ultra-long bond from breaking.

However, whether the new molecule really is a record-breaker, is up for debate, says Schreiner. ‘[I] have to note that we’re still keeping our record because the new molecule is not an alkane and the bond being broken is intramolecular,’ he explains. ‘The difference between a long bond that leads to dissociation of the molecule – as in our case – and one where an internal bond breaks is significant because the effects of entropy on these two processes are such that they make the intermolecular case much more difficult.’

Ishigaki and Suzuki believe it should be possible to design similar molecules to theirs that have ‘hyper-covalent bonds’ up to 2Å long.