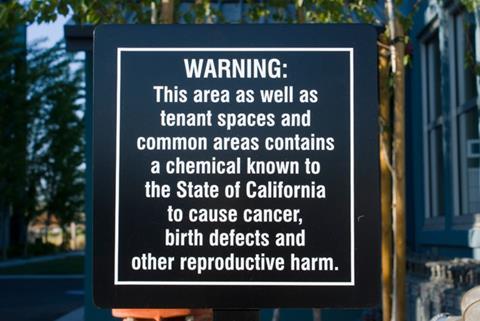 November will mark thirty years since Proposition 65 became law in California after residents overwhelmingly approved it through a ballot initiative as the Safe Drinking Water and Toxic Enforcement Act. But now even the law’s supporters acknowledge that it needs to be reined in. Many argue that what began as a public health statute to inform residents about their chemical exposures has morphed into a fraudulent payday for plaintiff’s attorneys.

Prop 65 directed California to publish a list of chemicals known to cause cancer, birth defects or other reproductive harm, and it also required businesses to notify consumers about significant amounts of these chemicals in the products they manufacture, sell or distribute in the state. There are now around 900 substances on this Prop 65 list, and the law has become increasingly controversial.

Proponents of Prop 65 say it has forced manufacturers and retailers to be more accountable for the potentially harmful chemicals inside their products. They say the law has led companies to reformulate their goods in order to minimise levels of key chemicals of concern. Some common examples cited involve removing lead from Mexican candy, getting lead and cadmium out of tableware and jewellery, reducing the suspected carcinogen acrylamide from potato chips, and ridding soda of 4-methylimidazole (4-MEI), a by-product of the production of caramel food colouring which was shown to increase cancer incidence in rodents.

‘In most, if not all, of those cases there was Prop 65 litigation or enforcement action involved,’ says Sam Delson, a spokesperson for California’s Office of Environmental Health Hazard Assessment (OEHHA), which administers Prop 65. ‘By providing more information about chemical exposures, we believe that Prop 65 is a valuable vehicle for informed choices, and a tool to protect public health and the environment.’ He says the law has led to safer products and to greater public awareness of chemicals and chemical exposures.

The non-profit Center for Environmental Health (CEH) says data from the US Environmental Protection Agency’s (EPA) Toxic Release Inventory (TRI) illustrates the positive impact of Prop 65. Under the TRI, companies must report annually on the toxic chemicals they release into the environment.

But even Delson, and other Prop 65 proponents, agree that change is needed. In 2014, California Governor Jerry Brown called for the law to be reformed. Now, OEHHA is working to improve Prop 65 and ensure that the warnings it mandates provide more meaningful information. The current warnings don’t specify the particular chemical or chemicals of concern in a product, Delson notes. OEHHA has proposed that future warnings would have to name the specific chemicals, and refer consumers the new OEHHA web site that contains fact sheets with information about the health effects of ‘Prop 65’ chemicals, and ways to reduce exposure.

[[Prop 65 has become a litigation playground for plaintiff’s attorneys]]One of the main reasons why Governor Brown pursued regulatory changes to Prop 65 was to stop the surge of frivolous lawsuits that arisen from the law.

‘Anyone just has to walk into a store and see a product that you think contains one of these chemicals, find out that it does, and you can sue the company if it doesn’t have a warning,’ explains Joseph Perrone, chief scientific officer at the Center for Accountability and Science in Washington, DC. The whole crop of lawyers who make a living on such litigation has been dubbed ‘bounty hunters.’

Opponents of Prop 65 argue that its warning requirement imposes unnecessary and costly mandates on businesses, rather than serving the public health. After 30 years, recent data issued by California’s Attorney General suggest that more than 70% of the money exchanged under Prop 65 in court settlements goes to law firms.

‘Prop 65 has become a litigation playground for plaintiff’s attorneys,’ states Anthony Samson from the California Chamber of Commerce. In fact, Kevin Ott from the Flexible Vinyl Alliance in Washington, DC says the average settlement from retailers, manufacturers, and distributors is $65,000 per notice. This means that businesses sued under Prop 65 could end up having to pay $65,000 in fines three separate times per lawsuit.

Another concern is that warnings on chemicals are useless if they aren’t put in context useful. ‘Simply containing a chemical is not tantamount to being exposed to a hazardous chemical,’ Ott says. He criticises Prop 65 for using a ‘hazard based approach’ with no reference point to actual exposure, and says it hasn’t improved the health of Californians.

In fact, California Polytechnic State University economist Michael Marlow has found that public health has not demonstrably improved because of Prop 65. Marlow looked at state health statistics and concluded that the law hasn’t had any impact on California’s cancer rates. He says no empirical study has ever shown it to have had any public health benefits.

‘I don’t believe that Prop 65 is going to be overturned anytime soon, but that doesn’t mean that we can’t improve it,’ Marlow states. He would like to see reforms that shift the burden of proof so that plaintiffs bear the cost of proving chemical exposures. This would decrease the number of low merit lawsuits, which have little to nothing to do with improving public health, he says.

Indeed, OEHHA is reworking the Prop 65 warning requirements to fulfil Governor Brown’s request. The new regulation will be finalised by November. Once adopted, they won’t go into effect for two years to provide a transition period for companies to make the required changes.

The implications of this state law go way beyond California, which is considered the world’s 8th biggest economy. Samson has put together a coalition to push for Prop 65 reforms, which more than 250 organisations have joined, and many are national groups whose members include international companies. ‘It is a big market to sell your products, and Prop 65 applies to any and all products sold in California, no matter their location of manufacture,’ Samson explains. This has made Prop 65 a global issue, and the effects of any changes will undoubtedly be felt far and wide.