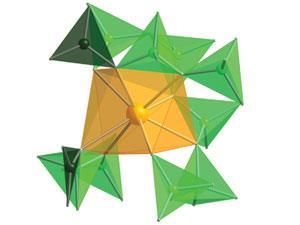 The bonding of the heaviest element that exists in usable quantities on Earth has just got a lot more interesting. Californium is the last member of the actinide series with an isotope long-lived enough to be studied in a standard radiological facility.

It was thought that its chemistry was dominated by ionic interactions, but the applecart is upset with a report that it bonds covalently to borate to form a compound with unusual properties.1 This californium borate has potential implications for disposal of nuclear fuels.

Many view the actinides as just heavy lanthanides that form ionic bonds. ‘So the ability to do sophisticated work is really lacking because it is just electrostatic interactions,’ says Thomas Albrecht-Schmitt of Florida State University. His lab has progressively demonstrated that there are, in fact, few parallels between lanthanide and actinide chemistry.

The latest report reveals the most dramatic example of covalent bonding in an f-element compound. When californium is wrapped up in an incredibly electron rich environment, in this case polyborates, the f-electrons are significantly involved. ‘If you take molecules like borate, in which electrons really move around a lot, you can form very polarised bonds with actinides. That is very different from what was expected,’ says Albrecht-Schmitt.

The electrons from the ligands are donated to the valence orbitals on the californium. But surprisingly, the 5f, 6d and 7p orbitals are all involved in the bonding. The 5f orbital shell contracts strongly across the actinide series and was expected to be energetically very stable.

‘The 7p and the 6d get involved. But what is really nice is that the 5f orbitals are clearly involved in the bonding. So the ligand is distorting the energies of the 5f orbital to a magnitude that has never been observed before,’ Albrecht-Schmitt explains. ‘That is more similar to what you would see in a transition metal and is very d-block-like behaviour, not f-block. So this californium chemistry is a link between the f elements and the d elements.’

Typically, synthetic studies on californium have been restricted to microgram scale, but the US Department of Energy supplied the team with several milligrams of 249Cf. This isotope is only produced at the High Flux Isotope Reactor at Oak Ridge National Laboratory, and the sample had a monetary value of more than a million dollars.

This is very d-block-like behaviour, not f-block

This compound shows some really unusual features, says actinide chemist Andy Kerridge at University College London, UK. ‘What we currently understand is that covalency tends to drop away as you go across the series to the heavier elements. Californium is one of the heaviest elements, so you wouldn’t expect to see much covalency there.’

‘The actinides are very different from one another,’ says Albrecht-Schmitt. ‘Even though plutonium is next to americium and they are in the same oxidation state, they don’t do the same chemistry. That really makes you think they are more like transition metals when combined with borate, and you certainly would not say they had the same chemistry.’ But he says that that is how people have been thinking about f-elements. ‘It just isn’t true, and the effects are even more pronounced when we get to californium.’

Kerridge adds that ‘this paper really challenges our views about bonding in the late actinides,’ and could have implications for the nuclear power industry, especially for separating americium, curium, berkelium and californium in spent fuel from fission reactors. ‘If you can develop compounds which exhibit this degree of covalency, it potentially gives you a method for separating them from each other,’ he says.