New probe uses a glowing pigment found in fireflies to signal the presence of hydrogen peroxide in the body, an indicator of tumours or disease

US scientists have developed a new glowing probe that can signal the presence of hydrogen peroxide in the body, an indicator of tumours or disease. The advance could allow the progression of tumours to be tracked in living animals.

Hydrogen peroxide is widely used in the body for signalling pathways, but is also given off by many cancers. Christopher Chang and colleagues at the University of California, Berkeley have been working on molecules that indicate the presence of hydrogen peroxide for a few years, and have looked to nature to improve their previous work by taking inspiration from fireflies.

The new probe is made of a luciferin molecule, a pigment found in bioluminescent organisms like fireflies, caged with a boronate ester protecting group. The probe selectively reacts with hydrogen peroxide, cleaving the protecting group and releasing the luciferin. In mouse models, the luciferin then reacts with the firefly enzyme luciferase that the mouse has been genetically engineered to produce, and the luciferin-luciferase system gives off a photon that triggers a bioluminescent glow. Unlike Chang’s previous methods using fluorescence, the light from the luciferin reaction can be seen through the body. 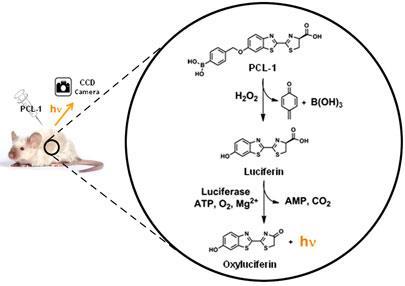 ’Bioluminescence allows for imaging in deep tissue, so it can be used in whole animals,’ explains Chang. ’It’s like we transferred the firefly’s ability to light up into a mouse, but also made it so it only emits light when certain chemistry of our choosing occurs.’

Because the luciferin luminescence can be seen through deep tissue, the team thinks that the probe could be very useful for studying the progression of disease, aging or injury in animal models, while keeping the animals alive. For both ethical and scientific reasons this is desirable: following a process in one living mouse is better than looking at several mice at different stages as a disease progresses, says Kevin Brindle, who works on imaging techniques at Cancer Research UK’s Cambridge Research Institute in the UK, adding ’we’re told by the government that we have to reduce animal experimentation and this will allow you to use fewer animals because you don’t have to sacrifice some at each time point.’

Brindle also explains that it’s very difficult to get a measure of hydrogen production in vivo, which makes this work of particular interest for the biological community: ’The attractiveness of this work is that they have the equipment and the technology to do this right away.’