Chemists in the US have discovered a novel way to transform organometallic compounds so that new metal-metal bonds are created. The transformation is mediated by stable carbenes, which are strong electron donors. The finding could lead to new ways to create metal-metal bonds in organometallic systems, something that can be difficult to achieve in a controlled and directed way.

Vincent Lavallo and Robert Grubbs, of the California Institute of Technology, US, reacted an N-heterocyclic carbene (NHC) with the compound bis(cyclooctatetraene)iron - Fe(COT)2. This consists of an iron centre sandwiched between two octagonal carbon rings, with the bonds between the iron and the rings in a state of constant flux.

Within minutes, small black crystals began to precipitate from the red solution, and subsequent analysis showed that these consisted of a novel compound comprising four octagonal rings and four iron atoms arranged in two conjoined pairs. Two NHC moieties were incorporated into the structure. 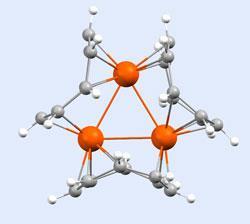 In a subsequent attempt to isolate an NHC-bound intermediate, the researchers repeated the experiment but used an NHC with a bulkier side-group. This resulted in the formation of another novel compound containing linked irons. This time the molecule consisted of a central cluster of three coupled irons surrounded by three octagonal rings - Fe3(COT)3. In this reaction it appears that the NHC acted as a catalyst to facilitate the bonding between the metals without becoming incorporated into the final product.

Grubbs believes that the new findings are potentially important. ’As chemists we have spent the last 60 years developing homogeneous transition metal catalysts to prepare organic molecules of interest,’ he says. ’The results presented in this study suggest it is possible to devise similar catalysts to perform organometallic transformations, which is a far more complicated endeavour. Ironically, the catalysis in our case is induced by a carbon-based molecule.’

Lavallo adds, ’Having stable carbene molecules - NHCs or related species - at our disposal has allowed chemists to exploit their properties for a variety of applications. In this study we see an entirely new application for such species, which has resulted in the isolation of the first triangular cluster compound in the group 8 transition metals, bearing purely hydrocarbon ligands.’

Richard Douthwaite, a chemist at the University of York in the UK who researches carbenes and organometallic systems, says that the work opens potentially intriguing new avenues of investigation. ’Control of the lability of the Fe-NHC bond appears critical. It would be interesting to know if this reaction is unique to carbenes, or if other two-electron donors could mediate similar transformations,’ he says. ’Certainly the new organometallic compounds they have made are beautiful, especially the trimetallic one, and their interpretation of the work is also thought provoking.’