Researchers in the US have developed a novel catalyst based on carbon nanotubes for the electrochemical reduction of oxygen. The new material, they say, could be an effective and cheaper substitute for platinum in certain types of fuel cell.

The team, led by Liming Dai of the University of Dayton, created tightly packed, vertically aligned carbon nanotubes that were doped with nitrogen atoms. When these nanotube arrays were used as cathodes in highly alkaline solution, they were able to catalyse the reduction of oxygen more efficiently than platinum.

The researchers suggest that the nanotubes could be useful in alkaline fuel cells, which were developed decades ago but for a number of reasons have remained commercially unviable. One reason, Dai suggests, is the high cost of platinum which is used as a catalyst in the fuel cells’ electrodes. 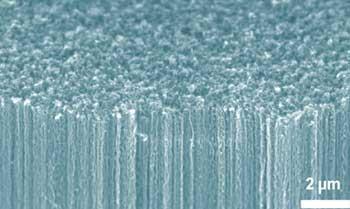 It was already known that carbon nanotubes containing iron were effective catalysts for oxygen reduction, with the iron-carbon centres forming the catalytic active site. Dai’s team, however, has shown that efficient catalysts can be made from a carbon nanotube scaffold without the need for metals, demonstrating a novel mechanism for the catalysis. They suggest that this new catalytic mechanism could be incorporated in other materials or used for other applications where the reduction of oxygen is required.

The presence of a small amount of nitrogen in the walls of the nanotube - typically around four or six atoms of nitrogen for every 100 of carbon - has the effect of drawing electrons away from neighbouring carbons giving them a net positive charge. When an electrochemical potential is applied to the electrode, these carbons become reduced, becoming negative or neutral. When oxygen is presented to the electrode’s surface, the carbons readily donate electrons to revert to their preferred positive status. ’This is the mechanism we believe is operating to provide a metal-free active site for the electrochemical reduction of oxygen,’ Dai says.

Precisely how expensive the new catalyst would be to produce commercially is not possible to calculate yet, says Dai. However, he adds, ’Since 1990 the cost of producing carbon nanotubes has fallen 100-fold and can be expected to fall further. Platinum on the other hand is a finite resource - there are limited reserves in nature.’