Researchers in Germany have designed a 3D carbon-based nanotube matrix that can store and release hydrogen extremely efficiently. The material could form the basis of a sustainable hydrogen economy, they say.

Hydrogen is a very clean and efficient energy source - when it burns the only by-product is water - and it is being looked to as an environmentally friendly next generation fuel. Materials that can store and release hydrogen are therefore highly desirable, but efforts to develop carbon materials for this purpose have only managed modest hydrogen uptake.

Stefano Leoni and colleagues at the Technical University of Dresden have now used a computer-based approach to design a 3D carbon nanotube structure that can store more hydrogen at room temperature than any other carbon-based material. ’This is a top down approach from advanced mathematics, to geometry, to computer modelling, to chemical properties,’ Leoni says. The resulting material would be lightweight, cheap to make and non-toxic, say the researchers, meaning it would be suitable for large scale production.

The US Department of Energy’s target for hydrogen storage materials by 2015 is 6wt% - six per cent of the combined weight of the material after gas adsorption should be stored hydrogen. Leoni’s new nanotube material has a total hydrogen uptake of 5.5wt% at room temperature which suggests it could be an ideal candidate. 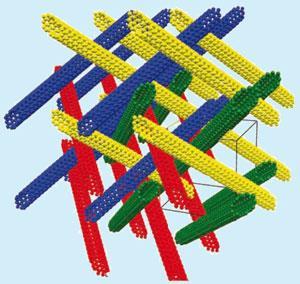 Hydrogen initially attaches at the points where the nanotubes touch. This doesn’t occur when the nanotubes are packed in parallel with the entire edge of each tube touching others

Inspired by natural sponges, the team designed a computer model that placed carbon nanotubes in the hole positions of a theoretical sponge network. ’Putting cylinders next to each other is a way of packing them. But there is another way - to put them so they cross over each other, like the holes in a sponge. Using modelling we found how many arrangements the nanotubes could be arranged in to fit this criteria,’ Leoni tells Chemistry World.

The carbon nanotubes were arranged in parallel, but with none of them intersecting. Each nanotube is in contact with others, but not all the way along the edge of the nanotube. After hydrogen adsorption simulations, the team found that these structures adsorbed a significant amount of hydrogen. ’The way we put them together provides some points of contact - at these points hydrogen preferentially adsorbed. Putting cylinders next to each other in a parallel fashion doesn’t have the same effect,’ explains Leoni.

’This work may encourage experimentalists to explore the possibilities of preparing 3D networks with properties similar to the idealised structures reported here,’ says Eleanor Campbell, an expert in the structure and properties of carbon nanotubes, at the University of Edinburgh, in the UK. ’It is difficult to make such well-ordered 3D networks and to my knowledge no one has succeeded so far with single-walled nanotubes, but a number of groups are now attempting to make them,’ she adds.

The next step for Leoni and his team is to make the structures experimentally with the help of collaborators. ’We would expect the material to be acting in the forefront of energy materials in the very near future,’ he says.