Swiss drug firm Novartis has lost its legal case against the Indian government, who it had accused of ’unconstitutional’ patent law practices. The ruling sets an important precedent that will cheer the flourishing generics market in the country.

The case was launched earlier this year, after the Indian government refused to grant a patent to Novartis for its cancer drug, Glivec (see Chemistry World March 2007 p18). Having established itself as a patent-free zone where generic drug-makers flourished, India finally joined the World Trade Organisation in 1995, and had to agree to start granting patents. As a developing nation, the country was given ten years in which to bring its patent laws into line with other WTO member states.

But India introduced a provision within its patent law - section 3(d) - which excludes ’incremental innovations’. Since a patent had previously been granted for imatinib (the active ingredient of Glivec) in many countries - prior to the introduction of patent laws in India - this meant that Novartis could be refused a patent for what it claims to be an innovative and improved therapy. 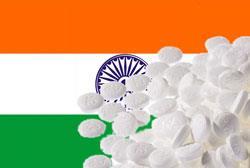 India’s Patents Act has stirred up controversy around the world

Novartis challenged the constitutionality of section 3(d), but that case has now been dismissed by the High Court in Chennai. The company said that it was disappointed with the decision, but said that it is unlikely to take its case to the Supreme Court - the next judicial stop for any appeal. The company also maintained that its actions had advanced the ’essential debate’ in India about intellectual property rights.

’It is clear there are inadequacies in Indian patent law that will have negative consequences for patients and public health in India,’ said Paul Herrling, head of corporate research at Novartis. ’Medical progress occurs through incremental innovation. If Indian patent law does not recognise these important advances, patients will be denied new and better medicines.’

The voluntary medical organisation Medecins sans Frontiers (MSF) has been campaigning to protect the existing patent regulations in India since the case was launched. It accused Novartis of ’ever-greening’ - repeatedly trying to gain patents for newer, but only slightly altered versions of existing drugs.

’The Court’s decision now makes Indian patents on the medicines that we desperately need less likely,’ said Tido von Schoen-Angerer, director of the MSF’s campaign for access to essential medicines. ’We call upon multinational drug companies and wealthy countries to leave the Indian Patents Act alone and stop pushing for ever-stricter patent regimes in developing countries.’

But this may not be the final chapter. Novartis also accused India of not complying with the WTO’s Agreement on Trade-Related Aspects of Intellectual Property Rights (TRIPS) by the agreed deadline. The Indian court decided that this was a matter for the WTO to resolve. Since only member countries can bring such trade issues to the WTO disciplinary committee, Novartis is unable to take the case any further.

But Carrie Scott from Novartis told Chemistry World that the company works with many WTO member states, including the Swiss government who have taken an interest in the debate and could support the petition. ’It is now up to WTO member states to decide how to carry this forward,’ she said.