Flexibility is key for a new type of olefin metathesis catalyst

US chemists have developed a new type of catalyst capable of exerting high stereochemical control over olefin metathesis reactions, an increasingly important tool for organic synthesis in which double bonds are swapped between two alkenes.

The scientists demonstrated the entantioselective power and efficiency of the new catalyst by synthesising a key precursor to the alkaloid quebrachamine - a reaction hitherto almost impossible with the current suite of olefin metathesis catalysts available.

’We are putting forward a completely new class of catalyst which we think is head and shoulders above anything else in terms of reactivity and selectivity,’ says Amir Hoveyda of Boston College in Massachusetts, who led the research team. 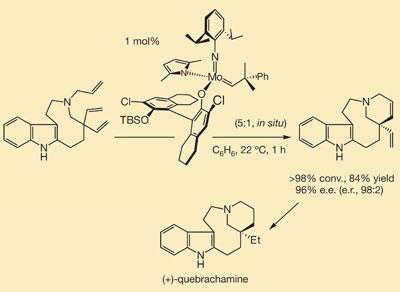 The new molybdenum catalyst is the first to efficiently produce quebrachamine

The new catalyst, based around molybdenum, has a number of novel features. Most metathesis catalysts incorporate rigid bidentate ligands, which form two bonds to the central metal. To increase flexibility, Hoveyda made his catalyst from four monodentate ligands. This structural flexibility - or fluxionality - allows it to accommodate high-energy, strained intermediates which would otherwise ’ping out’ of more conventionally rigid catalysts.

In addition, the catalyst is itself chiral, with the stereogenicity located at the metal centre. ’This is key because the first point of contact between the catalyst and substrate is the metal, and this means that the stereochemical information is transferred directly to the substrate, with no middle man,’ says Hoveyda.

In the synthesis of quebrachamine, an intermediate requires enantioselective ring-closing by metathesis of two tethered alkene functions. ’Our catalyst achieved this with high selectivity and extremely high efficiency,’ says Hoveyda. ’Some non-chiral catalysts can do the reaction but very inefficiently, and chiral catalysts simply cannot cope with it - they don’t work.’

Hoveyda says that his team’s unconventional approach to making stereogenic, flexible catalysts is applicable to a range of other metal centres capable of catalysing a wide variety of olefin metathesis. ’We think this approach will be fundamentally important,’ he says.

Alan Armstrong, an expert in organic synthesis at Imperial College London, says, ’This is excellent work which is interesting on several levels. The new chiral, molybdenum-based alkene metathesis catalysts show markedly higher efficiencies than earlier ones, and the effective enantioselective synthesis of the alkaloid quebrachamine showcases this quite impressively. More generally, the work exploits several key mechanistic concepts that will certainly stimulate many other groups working in asymmetric synthesis and catalysis.’