Researchers have observed one of nature’s most remarkable molecular machines in action. The ribosome is the structure within living cells that manufactures proteins. It attaches to a strand of messenger RNA and wriggles along it, ’reading’ the genetic code as it goes and translating the message into a lengthening chain of amino acids.

Now for the first time scientists have watched a single ribosome doing its job. Ignacio Tinoco from the University of California at Berkeley and his team from the US, Brazil and Japan took a single strand of mRNA which was looped around on itself in a structure called a hairpin. They tethered each free end to a tiny polymer bead. One bead was anchored in place, the other was held delicately by optical tweezers - two highly focused beams of laser light. Any movement of the optical tweezers could be accurately measured to the order of nanometres. 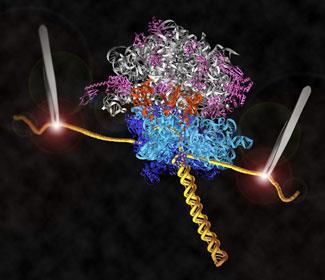 Schematic diagram of ribosome moving along a strand of mRNA held by ’optical tweezers’. In the experiment, only one end of the mRNA was held by tweezers; the other was anchored in place.

A single ribosome was attached to the mRNA just downstream of the hairpin loop. As the ribosome moved along the RNA, the hairpin opened up to allow the next section of genetic code to be read. In this way the RNA resembled an opening zipper with the optical tweezers gently pulling one end - as the zip opens the tweezers moved away by the same distance. ’The optical tweezers can measure this movement, so the motion of the ribosome can be directly monitored,’ says Tinoco.

The team showed that there is a distinct two-step process. First the ribosome ’reads’ three letters of the RNA code - called a codon. Each codon corresponds to one amino acid, which is ferried into the ribosome on a length of transfer RNA, or tRNA, and attached to the growing amino acid chain. This part of the process typically takes a few seconds while the ribosomal apparatus apparently ’checks’ to ensure that the correct amino acid is being slotted in place. Once the amino acid has been added, the ribosome shunts along to the next codon - which takes it only around a tenth of a second.

"People knew that ribosomes moved a codon at a time, but we can actually see it happening and measure how long it takes" - Ignacio Tinoco

’People knew that ribosomes moved a codon at a time, but we can actually see it happening and measure how long it takes,’ Tinoco says. ’What is clear is that the ribosome does not move smoothly along like a train - it goes in fits and jerks.’

The length of the pauses appears to be directly related to the mRNA’s secondary structure - its twists and folds. Martin Bushell, an RNA expert at the University of Nottingham in the UK says, ’This study confirms the speculation that ribosomes translocate along the mRNA three nucleotides at a time, and has uncovered the kinetics of this movement. This investigation will allow us to better understand how ribosomes translate mRNA with different degrees of secondary structure.’