Dynamic holograms change colour in response to pH or glucose

Scientists in the UK have developed a holographic sensor that changes colour in response to particular analytes. The sensors, made from a hydrogel containing precisely layered silver nanoparticles, could cost just 10p each to produce, making them potentially attractive for mass screening of clinical or environmental samples.

The work has been carried out by Ali Yetisen and colleagues at the University of Cambridge in Chris Lowe’s laboratory, is based on a concept originally developed by Jeff Blyth, which involves the creation of a ‘dynamic’ holographic diffraction grating.

A 10µm layer of  polyhydroxyethylmethacrylate hydrogel is impregnated with silver nanoparticles, initially distributed randomly. Two or more high-powered laser beams are directed onto the hydrogel. As the beams interfere, peaks and troughs of energy form – dictated by the laser wavelength. This results in optical and heating effects within the hydrogel, which cause the nanoparticles to arrange into discrete layers with a precise distance between each layer, creating a holographic diffraction grating. 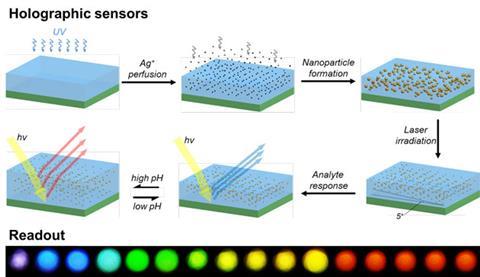 When white light hits the grating, monochromatic light is diffracted from it. The colour of this monochromatic light is determined by the distance between the silver layers, and hence the wavelength of the lasers used to make the grating. In solution, the hydrogel can swell or shrink depending on local interactions of species within the solution and hydrogel. As the hydrogel expands or contracts, the distance between the silver layers changes, altering the colour of the diffracted light.

A change in proton concentration in the solution, for example, results in colour changes. Distinct shifts can be detected by the naked eye following a pH change of only 0.25 units, with the hydrogel turning from blue, say, to green. With a digital camera on a smartphone, even smaller changes can be distinguished, down to around 0.01 pH units.

A prototype sensor is being tested in a diabetes clinic at Addenbrooke’s hospital in Cambridge, where it is being used to screen patients’ urine samples for the presence of glucose.

Mark Evans, a diabetes consultant and researcher who is helping to test the device, says, ‘Having seen it work with real patient samples I did not expect it to work quite as efficiently as it has.’ Evans points out that the concept is in very early stages of development, but that ‘if it can find an appropriate medical niche and if it gets through the science, its cost could make it very clinically applicable’.

Yetisen says the challenge now is to develop ligands for the sensor that will bind a range of key analytes with a high degree of specificity.