US researchers have applied synthetic organic chemistry to crack a mystery that has baffled scientists for more than 50 years: how the powerful, naturally occurring antifungal compound amphotericin B interacts with sterols in cell membranes.

The work, carried out by Martin Burke’s group at the University of Illinois at Urbana-Champaign, could open the way to reducing amphotericin’s toxic side effects, and to developing new drugs to replace faulty proteins in human cells - as a kind of molecular prosthesis.

Amphotericin, a macrocycle found in certain bacteria, is a potent antifungal agent that forms molecular pores in yeast cell membranes. These channels allow ions to flow out of the cell, eventually killing it. This is intriguing because ion channels are usually formed by proteins. Ion channel dysfunction is implicated in many diseases - such as cystic fibrosis - and the possibility of using a small molecule to create a replacement ion channel is an enticing one. 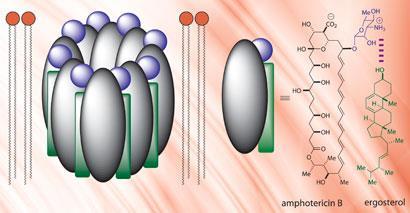 However, until now a key aspect of amphotericin’s molecular action has remained stubbornly unresolved. The molecule requires sterols - such as cholesterol or its fungus-specific relative ergosterol - to be present in the cell membrane for it to form ion channels and to kill fungal cells. But whether amphotericin binds directly to the sterols, or whether the sterols act indirectly has been impossible to ascertain.

Burke’s team resolved this question by carrying out a highly sensitive assay - isothermal titration calorimetry - that can measure the tiny amounts of heat released during molecular binding events. The results showed unequivocally that direct binding occurs.

Using painstaking synthetic techniques, the researchers then created derivatives of amphotericin by systematically deleting two functional groups - a carboxylic acid and a mycosamine sugar group - which have been postulated to be involved in sterol binding. ’This process of deletion was extremely difficult because the molecule has multiple hydroxyl groups that need to be protected, and a polyene region that is susceptible to attack,’ Burke says.

The binding test was repeated with the derivatives, showing that it is the sugar group alone that is needed for sterol binding to form ion channels and to kill fungal cells.

’We can now focus on ways to modify the molecule to reduce its toxic side effects as a drug,’ says Burke. ’We can also start to examine more closely its ability to form ion channels, which could open the way to developing other small molecules that could act in this way and replace damaged ion channels.’

Andrew Myers, an expert in natural antibiotic compounds at Harvard University in Boston, US, says that the pathways of ’molecular editing’ that Burke’s group developed to create the amphotericin derivates are ’remarkable’. Myers adds, ’This work sheds light on structure-function relationships in one of the most important antifungal agents in use today.’