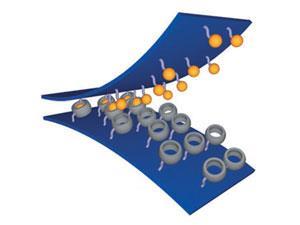 South Korean scientists have developed a chemical velcro that shows promise as a strong and reversible underwater adhesive. The team suggests it could have many applications that require controllable adhesion in aqueous environments.

Previous efforts to create underwater adhesives have mainly focused on biomimetic catechol-based polymers that are secreted by marine organisms, including mussels. However, these require curing agents and work by covalent crosslinking, which results in permanent adhesion.

Now, Kimoon Kim and colleagues at Pohang University of Science and Technology, have developed a reversible and strong supramolecular adhesive that works underwater like the fabric hook and loop fasteners of velcro.

'There are growing needs for new adhesion systems that have high strength in water, repeated attachment and switchability on demand for biological applications such as surgery sutures and repairing living tissue,' says Kim. 'Compared to existing adhesives, our supramolecular velcro is not only mechanically reversible but also chemically switchable.'

The team's chemical velcro comprises two separate silicon wafer surfaces: a ‘loop’ surface that is functionalised with ring-shaped cucurbit[7]uril groups; and a ‘hook’ surface that is covered with aminomethylferrocene molecules. When placed together, the ferrocene binds tightly inside the cucurbituril cavity, using hydrophobic and ion-dipole interactions. 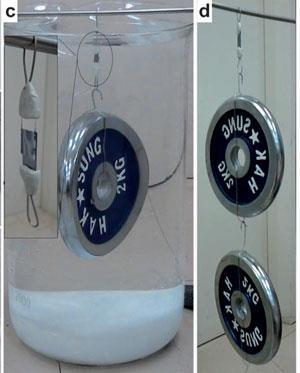 'We were surprised to see that the supramolecular velcro can lift a 2kg mass in water,'  explains Kim. 'Moreover, its lap shear adhesion strength in air is much higher than that of commercial available adhesives, including double-sided tapes and traditional velcro.'

The surfaces can either be mechanically peeled apart or separated chemically with sodium hypochlorite. However, the team found that the material lost some of its adhesion strength after repeated cycles of binding and chemical unbinding. Kim thinks an electrical field might offer a more efficient alternative to a chemical redox agent for switchable underwater adhesion.

'This is very elegant work that takes a molecular recognition event between cucurbituril and ferrocene and translates that into macroscopic adhesion between surfaces that functions in water,' says Philip Gale, a supramolecular chemist at the University of Southampton, UK.  'There should be many applications for this supramolecular velcro and it is exciting to see events on the macroscale directly influenced by molecular level supramolecular processes.'

'The non-cytotoxic nature of cucurbituril and ferrocene permits potential biological applications, but an adhesion test in body, or at least in vivo, is needed,'  says Kim. 'The process is very simple but the critical step to determine the price for commercial manufacturing is preparing functionalised cucurbituril.'