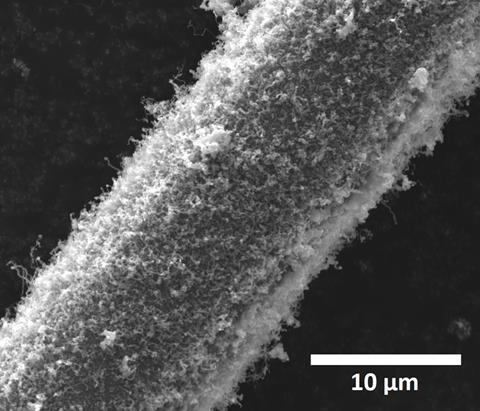 Fuzzy silicon carbide (SiC) fibres that can interlock like Velcro are the latest development in the search for lightweight, temperature-resistant parts for spacecraft engines.

Jet engine parts have to resist extreme temperature changes while being as tough and as light as possible. ‘Silicon carbide is a very high temperature stable and ultra-low density material,’ explains Chandra Sekhar Tiwary, from Rice University, who led the study alongside Pulickel Ajayan, also from Rice, and Janet Hurst from Nasa. Woven into a carpet-like material and embedded into a matrix, also made out of SiC, the fibres make a durable material.

However, under repeated stress and with constant temperature changes, smooth fibres start sliding past each other and may even be pulled out of the matrix. Air can then enter through the resulting gaps, making the material brittle.

To solve this problem, the team has taken inspiration from Velcro’s hook-and-loop mechanism and developed fuzzy SiC fibres. Each fibre carries thousands of nanosized hooks on its surface that interlock and anchor them inside the surrounding matrix. This makes the resulting materials more resistant to the extreme temperature changes in engine parts. 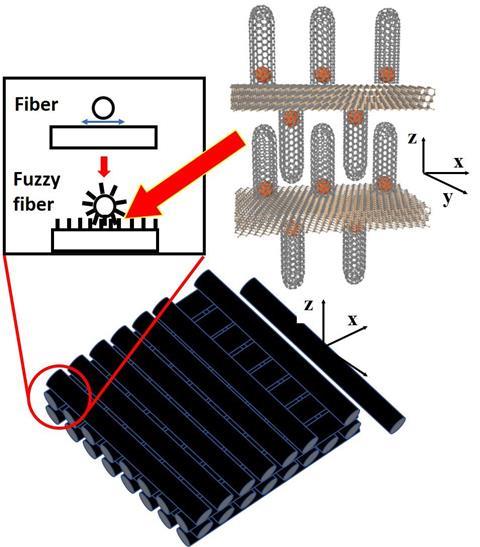 Embedded into a polymer, the fuzzy SiC carpet can withstand greater deformation before breaking than smooth fibres. At high temperatures, up to 1000°C, the SiC hooks accumulate a layer of silicon oxides. While this looks like a flaw, it helps keep the material free of gaps through which oxygen could enter.

‘It seems that the development is still incipient but showing a promising processing method,’ comments Oscar Rubem Klegues Montedo, who researches ceramics and materials at the Universidade do Extremo Sul Catarinense in Brazil.

While the fuzzy fibres are as cheap and quick to produce, Tiwary emphasises that it’s too early to know if they will be viable for real-life applications. ‘High temperature tests are demanded to evaluate the performance of such material for the suggested application,’ adds Montedo.

The team is also thinking about commercialising the fibres. ‘There are start-up companies that are interested in our research,’ Tiwary says.