Researchers have found a safe, speedy and environmentally friendly way to clean up chemical weapons such as sulfur mustard, using a hydrogen peroxide-based microemulsion decontamination system.

One of the most practical ways to decontaminate these toxic substances is to oxidise the sulphur mustard to the sulfoxide with liquid decontaminants, but most suitable oxidants are water-soluble while sulphur mustard is water immiscible. This has been tackled in the past by using micellar or oil-in-water microemulsions, but still leaves the problem that most active liquid decontaminants are highly corrosive and not environmentally friendly.

Hydrogen peroxide solutions could provide an answer as they are stable, non-corrosive, atom efficient oxidants with low environmental impact - but uncatalysed hydrogen peroxide reactions with organic sulfides are slow so would need a catalyst to become a viable option.

The team investigated catalysts that are oil soluble or surface active to tune selectivity and reaction rates, and achieved decontamination half-lives as fast as 18 seconds with dilute hydrogen peroxide as the oxidant. 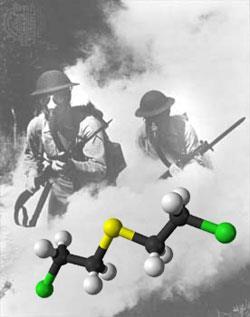 Mustard gas a member of the sulfur mustards, was used as a chemical weapon in the first world war

Lead author Ian Fallis of Cardiff University, UK, explained the team’s approach: ’We have used a range of modern techniques to directly measure, as opposed to merely speculating upon, where the catalysts and substrates reside within the microemsulsion.’ Two of those methods, SANS and PGSE-NMR, are used in colloid chemistry, says Fallis, adding that using them to help interpret reaction rates was an ’unusual approach.’

A prime goal of the research was to achieve high rates of selective catalytic decontamination, using a non-corrosive environmentally benign oxidant, says Fallis. One of the most effective HD oxidising systems is the basic hypochlorite (bleach)-based microemulsions, but it is now thought too corrosive and environmentally unacceptable for wide-scale use.

Microemulsions show huge potential as a ’compartmentalised’ reaction media for decontamination, Fallis says. ’The simultaneous presence of oil, interfacial and water regions give broad solubility for catalysts and substrates whilst the compartmentalised nature of the reaction medium offers new opportunities to precisely control rates or selectivity,’ he says, adding: ’We show that selectivity in a reaction can be achieved by matching the loci of the catalysts and starting material - whilst mismatching those of the catalysts and product.’

He also notes that the team was able to selectively stop the oxidation at the intermediate sulfoxide level, which is of low toxicity, before it reached the sulfone levels, which is still toxic.

So-called mustard gas was first used effectively as a chemical weapon in first world war and although later banned by international treaties, continued to be used in some countries. Old weapons and stockpiles, however, were often not properly disposed of and still pose a risk. Many German shells containing sulphur mustard were dumped into the Baltic Sea following the second world war for example, and need to be decontaminated to protect Baltic Sea fishermen.

’I have to say that I am quite impressed by the toolkit used to tackle the problem,’ says Blum. ’Although the oxidative type of chemistry used is not new, the idea to exploit the different compartments of the emulsion - water and oil - is an interesting approach. Also it is important that it was demonstrated that oxidation could, in fact, be stopped at the sulfoxide level and stopped from proceeding to the sulfone, which is toxic again.’