A wheel-like arrangement of quinone molecules could process up to 16 instructions at the same time, potentially giving a powerful boost to the computers of the future, according to researchers in Japan.

Anirban Bandyopadhyay and Somobrata Acharya at the National Institute for Materials Science in Ibaraki used a molecular four-state switch made of duroquinone (2,3,5,6-tetramethyl-1-4-benzoquinone). Bandyopadhyay and others have already shown these quinone molecules can each store two bits of data, distinguished both by their charges and their conformations [1]. They were also able to toggle the two bits between ’on’ and ’off’ states using electronic pulses from a scanning tunnelling microscope (STM). 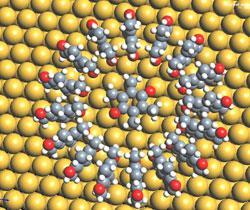 Now Bandyopadhyay and Acharya have investigated assemblies of several such molecules on a gold surface. They found that 16 duroquinone molecules can be made to form a closed circle if a 17th molecule is placed in the middle to help form a hydrogen bonding network between them. Only eight of the 16 molecules on the outside of the circle act independently of each other, as each quinone interacts with its neighbours.

When they used an STM pulse to switch the central quinone between different states, they found the signals were transmitted to eight peripheral molecules.

As the eight molecules can each store two bits of information, the device theoretically has processing power of 16 bits and could carry out many calculations simultaneously. That could make the assembly an attractive component in the faster parallel computers of the future, Bandyopadhyay says.

For Bandyopadhyay, this is just a starting point for building up to more complex assemblies of quinone molecules. ’Now the architecture is like a disk on a surface; I will build a spherical one and realize similar "one to many" communication on that structure’s surface,’ he says.

However, computation experts contacted by Chemistry World are not yet convinced that this is the way forward. It is not clear, one expert said, whether this system can actually perform parallel computation, or whether it only acts as a hub that distributes a signal. Without a clear demonstration of parallel computation, the work is ’clearly clever, but probably unimportant,’ he said.