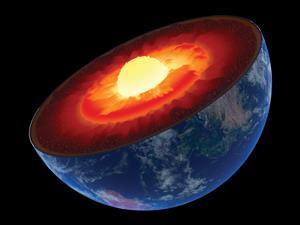 Theoretical calculations have confirmed that the Earth's core contains a significant proportion of oxygen. This has been proposed before, but the new research confirms it with rigour not previously possible. The presence of oxygen can be used to constrain models of the Earth's formation, suggesting the early Earth may have been a hotter, more oxygen-rich environment than some models predict.

By measuring the Earth's moment of inertia and looking at meteorites made of material similar to the planet, scientists calculate that the core is mostly made of an alloy that has 16 times more iron than nickel. However, seismic waves travel through the core more quickly than they would through a pure iron–nickel alloy, implying that some lighter elements are present. Sulfur, silicon, carbon and oxygen have all been suggested.

It’s not possible to get a sample of the Earth’s core, so the team at the French National Centre for Scientific Research and University College London used density functional theory to predict the densities and seismic velocities of the iron–nickel alloy combined with various amounts of these light elements. They found that every combination satisfying all four boundary conditions contained significant amounts of oxygen. The inner core also contains silicon, but the crystal lattice of solid iron rejects oxygen atoms. Their best estimate is that, in addition to the iron–nickel alloy, the Earth's outer core comprises 3.7% oxygen, 1.9% silicon and no sulfur or carbon.

Author John Brodholt says that the idea that the core contains oxygen and silicon is not revolutionary, but that various possible compositions are currently favoured by geophysicists. ‘We're not suggesting completely different elements that have never been thought of before,’ says Brodholt, ‘we're just tying it down in a much better way.’ In doing so, he says, they also constrain the possible conditions under which the Earth's core differentiated from the mantle. Oxygen is not very soluble in iron at low temperatures, explains Brodholt, so these results ‘would suggest a relatively oxidising and potentially a warmer early Earth’.

Electronic structure theorist and earth scientist Artem Oganov at Stony Brook University, US, says that the UCL group proposed a similar composition for the core back in 2002 and ‘the conclusion of their work is completely confirmed by this paper’. While he accepts that that the outer core contains oxygen, he is sceptical that sulfur is entirely, or almost entirely, absent. ‘If you look at iron meteorites which represent the cores of failed planets in the solar system, they contain a lot of sulfur,’ he says. ‘I have never met a person who thinks the Martian core contains less than 20% sulfur. Why would the Earth's core be so different?’