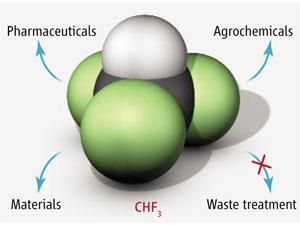 Fluoroform could be re-tasked to make useful chemicals

US scientists appear to have cracked a long-standing problem in organofluorine chemistry – how to find a simple and efficient way to use the low-cost and abundant compound fluoroform as a trifluoromethylation agent. The work opens the way to tap the large volumes of fluoroform, CF3H, which are by-products of the synthesis of materials such as refrigerants and the non-stick coating polytetrafluoroethylene (PTFE) better known as Teflon.

Fluoroform is a greenhouse gas with a potency several thousand times greater than that of CO2. However, because no one has yet been able to adequately harness the chemical potential of the molecule much of the thousands of tonnes of fluoroform produced each year is expensively decomposed by methods such as thermal oxidation or catalytic hydrolysis.

Now, Surya Prakash and his team at the University of Southern California have found a way to use fluoroform for the direct nucleophilic trifluoromethylation of silicon, boron, sulfur and carbon centres. The resulting fluorinated species are all useful for subsequent organofluorine chemistry, which is playing an increasingly prominent role in the development of new drugs and agrichemicals.

Trifluoromethylation is a key synthetic step in many organofluorine syntheses and is usually achieved using bromotrifluoromethane, CF3Br. This, however, is a potent ozone-depleting gas whose use is strictly regulated under the Montreal Protocol, limiting its use and making such syntheses expensive. If chemists could use fluoroform, these synthetic procedures would be much cheaper to carry out and would also help to consume – albeit in relatively small quantities – a nuisance waste product.

However, breaking the powerful C–H bond in fluoroform and stabilising the resulting CF3 anion has, until now, proved too tricky for the molecule to be of widespread use. ‘Thus far no one has been able to use it routinely as a reagent,’ says Prakash.

That seems likely to change because Prakash’s team has developed a protocol which generates and stabilises the CF3- anion to allow direct trifluoromethylation of a range of targets. The team initially showed that if CF3H is dissolved in toluene with potassium hexamethyldisilazide as a stabilising base, this allows the direct introduction of the CF3 group into trimethylsilyl chloride. Building on this success, the researchers showed that careful optimisation of solvent and reaction conditions enables CF3H to trifluoromethylate a wide range of silicon, boron, sulfur and carbon-based compounds.

Prakash accepts that,  in the short term, the ability to use fluoroform to create useful synthetic reagents is unlikely to make a huge dent in the thousands of tonnes of fluoroform produced annually. ‘But costs of doing this chemistry will become lower because fluoroform has not got much value,’ he says.

‘Conversion of CF3H via this route is not entirely unexpected, although the ease with which it is done here and the fact that the conversion is so high is impressive,’ says Alan Brisdon, who runs the fluorine research group at the University of Manchester, UK. ‘The challenges that remain include being able to collect and separate the CF3H by-product from the relevant industrial processes, if this is really to become a way of using an otherwise unused by-product and even then the very high volatility of CF3H means that it will be relatively difficult to use and handle in the laboratory.’

Günter Haufe, an expert in organofluorine chemistry at the University of Münster in Germany, tells Chemistry World that Prakash’s new methods ‘are important for the further development and production of highly versatile and frequently used building blocks to construct more complex organic molecules such as pharmaceuticals, agrochemicals or materials’. Haufe adds that the use of a waste by-product to substitute for ozone-depleting reagents is also a key advantage.