US researchers have smuggled modified sugar molecules into a developing zebrafish embryo and then used ’click chemistry’ to snap a fluorescent tag onto them to watch cells and tissues forming. This is the first time that scientists have been able to directly monitor such processes in the zebrafish, a widely used model for studying the development of vertebrates. 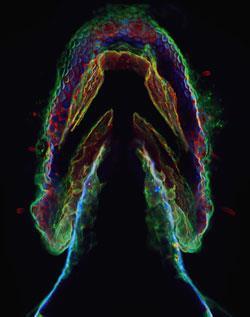 Sugars that reside on the cell surface undergo changes during cell differentiation and organ development. Shown is an image in which sugars that were produced at different time points during the zebrafish development were distinguished using multi-coloured fluorescent reagents

Sugar molecules are central to the signalling that takes place between cells during development. The levels of different glycoproteins and glycolipids - sugar molecules attached to proteins or lips in the cell membrane - indicate that important developmental processes are underway. But directly measuring this has been difficult.

Now Carolyn Bertozzi’s group at the University of California, Berkeley, has shown how it can be done by using click chemistry - where two ’high energy’ molecules react together rapidly and specifically under mild conditions.

A typical click chemistry system involves the reaction of an azide - three linked nitrogen atoms - with an alkyne. The US researchers exposed developing zebrafish to the artificial sugar N-azidoacetlygalactosamine, closely related to a natural sugar but containing the important azide group.

’The sugar is not recognised as foreign by the organism and is incorporated into the cell membranes,’ says team member Jeremy Baskin.

After a pre-determined interval the fish are exposed to a fluorescent dye that possesses the alkyne group. The key innovation is the atomic environment of the alkyne bond. It is held in a stable but strained eight-member ring, a cyclooctyne. Classical click chemistry involves a copper catalyst - which is toxic. To get around this the team instead has developed molecules that are stable, but only just, and which will react without copper. ’We synthesise a specific type of alkyne with a tremendous amount of strain,’ says Baskin. ’It is the most reactive one of its type that is still completely stable.’

Once the reaction has occurred, the position of newly synthesised sugar-containing molecules can be seen under a microscope. ’The neat thing is that we can wait for a period then do a second click reaction with a different colour, which allows us to see how development has progressed,’ Baskin says. The team has so far used three dyes in this way, demonstrating dramatic bursts of cellular activity in the jaw, olfactory organ and pectoral fins of the embryo 60 hours after fertilisation.

’In principle the technique should be applicable to other organisms,’ says Baskin. ’We have shown that adult mice can incorporate these unnatural sugars and we have done a similar kind of thing with the worm C. elegans.’

Ben Davis, who researches the chemistry and biology of proteins and carbohydrates at the University of Oxford in the UK described the work as ’beautifully elegant’.

’It really demonstrates the power of a simple and clean chemical reaction in a biological system and is a leading example of what you might call in vivo chemistry,’ Davis says. ’This kind of method for probing whole biological systems will allow us to ask a whole range of new questions about the fate of complex molecules in living organisms.’