US researchers have used ’click chemistry’ to attach chemical tags to complex sugar molecules in the cells of live mice, allowing the synthesis of the sugars - glycans - within the cells to be tracked. The ability to monitor glycan expression in a living animal will give scientists new insights into the role that the sugars play in many cellular processes such as the development of embryos and the spread of cancer.

Glycans are found both within cells and on the surface of cells and play a key role in many processes, including signalling between and within cells. It is known, for example, that cancer cells that are likely to spread to other parts of the body have altered patterns of surface glycans.

Current technologies for detecting glycans rely principally on developing antibodies against specific glycans, or on sugar-binding proteins called lectins. However, both methods have limitations and are not suitable to use in living animals. The development of antibodies, for example, requires a specific glycan to be isolated and purified - something that is not always possible. Lectins are often toxic.

Now, Pamela Chang and colleagues at the University of California, Berkeley, have recruited click chemistry to provide a new approach. Click chemistry involves the specific and rapid reaction of two ’high energy’ molecules under mild conditions.

The researchers introduced a synthetic precursor of sialic acid - a key component of many glycans - into mice. The molecule contains an azide group which is not recognised by the cell, enabling the ’fake’ sialic acid to be incorporated into newly synthesised glycans. The team then exposed the cells to a highly strained, eight membered ring molecule termed a cyclooctyne. This ’clicks’ with the azide. The cyclooctyne itself has attached to it a peptide, termed Flag, which can be detected by a standard biological assay. 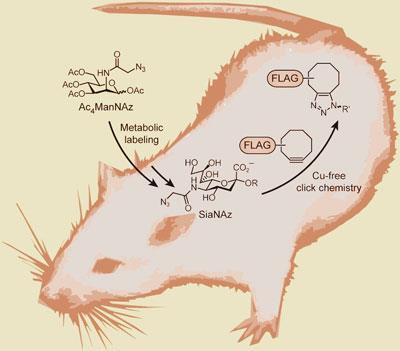 ’In this way we can monitor the expression of patterns of glycans in different cell types and tissues,’ says Chang. She points out that the Flag assay requires the cells to be extracted for analysis. ’What we would like to do next is to functionalise the cyclooctynes directly with an imaging agent so that we can image glycan expression patterns directly.’

Hermen Overkleeft, professor of bio-organic synthesis at the University of Leiden in the Netherlands, says, ’Making two molecules react both efficiently and selectively in living animals is one of the most challenging yet ultimately most rewarding research objectives in chemical biology.’ Overkleeft says that by demonstrating that such chemical reactions are possible in mice without apparent toxic effects provides a roadmap for developing similar technologies. ’I am very excited to see where this research will go in the future,’ Overkleeft adds.