Clothes power up thanks to nanowires

Researchers in the US have invented a yarn that can generate electricity simply by being bent or twisted. Clothes made from the fabric could generate enough electricity to power a mobile phone or iPod, the scientists say.

Zhong Lin Wang and colleagues at the Atlanta Institute of Technology in Georgia have exploited the piezoelectric properties of zinc oxide (ZnO) - when certain crystals of ZnO are bent or twisted they generate a small pulse of electrical energy. 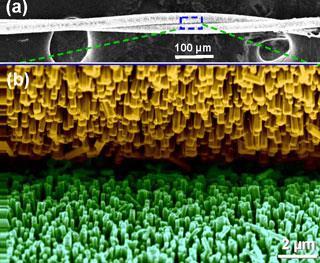 (a) Scanning electron microscope image of two entangled microfibres that were covered with piezoelectric ZnO nanowires. (b) A magnified SEM image of the area where the two ’brushes’ meet teeth-to-teeth, where the top one is coated with gold and the bottom one is as-synthesized ZnO nanowires.

By placing a thread of the carbon fibre material Kevlar into a solution containing zinc and oxide ions, the team was able to cover the thread in tiny nanowires of zinc oxide, each wire growing laterally from the central carbon core so that the final structure resembled a microscopic bottle brush. The nanowires are between 100 and 200nm in diameter and a few micrometres long.

The researchers then grew a second ’bottle brush’ and coated it with gold. They intertwined the two threads and showed that if the threads are moved relative to each other the friction causes the crystals to bend, generating electricity. The gold-coated thread carries away the electricity, which could be stored or used to power small electronic devices.

"We think that at its optimum output we could get 80 milliwatts of electrical power from a square metre of fabric. That would be enough to power a cellphone or an iPod" - Zhong Lin Wang

Wang and his colleagues made a tiny patch of fabric using six such threads to show that the system could potentially be scaled up. ’We think that at its optimum output we could get 80 milliwatts of electrical power from a square metre of fabric,’ Wang told Chemistry World. ’That would be enough to power a cellphone or an iPod, or the power could be accumulated and stored for later use.’

Clothes made from such a fibre need not be expensive, Wang added. ’The technique for growing the nanowires on the fibre is cheap and it was done by chemical synthesis at 70?C,’ he said. ’More importantly, ZnO is a biocompatible and biosafe material.’

The work is an example of ’energy scavenging’ - technology aimed at extracting useable energy from the environment to power small electronic devices where power might otherwise be difficult to come by, such as in the deep jungle. 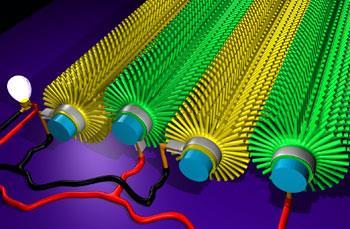 A schematic illustration of the microfibre-nanowire generator

Steve Beeby, an energy-scavenging expert from the University of Southampton, UK, told Chemistry World that while fabricating the nanowires and showing that they generate electricity was an impressive feat, there are still practical hurdles to overcome.

’The robustness of such nanostructures for the long term generation of energy in the envisaged applications will always be a concern,’ Beeby said. ’I feel it will be some time before the predicted power output of 20-80 milliwatts per square metre is achieved using this approach.’