Scientists have used cofactors to control the enantioselectivity of supramolecular transition metal catalysts, enabling the asymmetric hydrogenation of a series of acrylates and related compounds with remarkably high selectivities. This strategy could be useful in the search for new catalysts for fine chemical production.

Joost Reek, from the University of Amsterdam in the Netherlands, and colleagues took inspiration from the natural world, in which many enzyme controlled reactions are facilitated by the presence of cofactors - small molecules that influence the activity of catalytic processes. ’There are a lot of potential chiral cofactors available, including those from the natural chiral pool, making a catalyst with a recognition site for acetates [as cofactors] an interesting candidate to study this concept,’ says Reek. 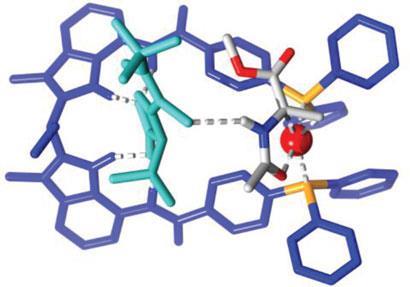 Cofactors (light blue) can influence the enantioselectivity of catalysts

They used a rhodium(I) complex with an achiral bisphosphine ligand as a catalyst, which provides good binding site for acetates. A total of 18 chiral acid cofactors were tested for asymmetric hydrogenation, ’which is the most widely used reaction in the fine chemical industry for the creation of chiral centres,’ Reek says. As the complex is achiral, any chiral effects observed during the reaction are due to presence of the cofactor.

An acetamidoacrylate was almost completely hydrogenated under mild conditions for most of the cofactors, the best performance being achieved with tert-butyl thiourea which gave an enantiomeric excess of 99 per cent. Control experiments confirmed that the cofactor is bound to the metal complex binding site, which itself must be near the rhodium atom.

Calculations on the complex with tert-butyl thiourea revealed that hydrogen bonds between the N-H of the substrate and the carbonyl group of the cofactor play an essential role in the selectivity. This was confirmed by comparative hydrogenations with other enamides and alkenes as substrates, which were converted with medium to high and moderate enantiomeric excess, respectively.

In further experiments with a mixture of 12 cofactors competing for the same catalytic binding site, high selectivities were observed with the most active cofactor dominating the reaction. ’This forms the basis for a deconvolution strategy, such that the best cofactor can be identified by doing a limited number of experiments,’ Reek says. ’We believe that this strategy may be valuable for the identification of new catalysts for asymmetric hydrogenation to produce fine chemicals.’

Frank Glorius, who oversees a catalyst research program at the Westf?lische Wilhelms University of M?nster, Germany, says: ’The work is truly amazing. I would not have predicted these exciting results. This innovative work should facilitate an optimisation of catalyst systems and should act as a blueprint for further supramolecular catalyst systems.’