Researchers in the US have shown how it might be possible to use computational chemistry to predict which mutations in a key influenza virus protein could lead to dangerous new strains of the disease.

Haemagglutinin is a protein which influenza viruses use to bind to specific sugar molecules on the surface of the host cell. It is thought that the more tightly the haemagglutinin binds, the more infective the virus could be. The avian influenza virus, for example, has a particular haemagglutinin that binds to sugar molecules found in cells in the upper respiratory tract of birds. These sugars are slightly different to those found in the cells of the human upper respiratory tract, but if bird flu haemagglutinin mutated in a way that favoured stronger binding to the ’human’ sugar, it could result in a strain of the virus that could be more easily transmitted between humans. 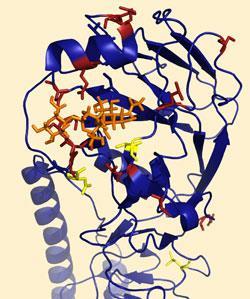 Part of the haemagglutinin head with a small sugar molecule in orange. The mutation sites most strongly predicted to destabilise ligand binding by haemagglutinin are shown in yellow

However, it is not known which mutations in the viral protein might cause this stronger binding. Now, Peter Kasson and colleagues at the University of Stanford in California have shown how molecular dynamics simulations might provide useful clues about which amino acids in the protein are important for binding.

Using data from x-ray crystallography of haemagglutinin bound to the bird-type sugar, the researchers carried out a series of molecular dynamics simulations to determine which amino acids in the protein had most influence on the binding event. They combined this information with data on the sequence of avian influenza haemagglutinin to pinpoint potential sites of mutation in the DNA that could result in the relevant amino acids being altered - and therefore have a possible impact on the binding.

Limited experimental data do exist which suggest that the predictive method could work, but Kasson concedes that more experimental work is needed to confirm that the method is accurate. ’Mutations that change the binding specificity from bird-type sugars to human-type sugars could be a high-risk mutation for human-to-human transmission,’ Kasson says. ’If we can predict these mutations in advance it would give us much better data for surveillance and control.’

Peter Coombs, an expert on the influenza virus at the National Institute of Medical Research in the UK, says ’If computer simulations can predict mutations that might result in the virus binding more strongly to the host cell then we can create these mutations in the lab and test them.’ This would provide better insights into the interaction of haemagglutinin and cell surface ligands. ’It is an interesting approach and if it comes to fruition it could be very useful. However, a lot more experimental work is needed to confirm that the method can provide useful predictions.’