Mosquitoes seeking to gorge on human blood could soon be faced with a new range of chemicals designed to put them off, thanks to research in the US. Scientists from the University of Florida and the US government’s Agricultural Research Service have ’trained’ a computer to predict the structures of possible repellent molecules and found several that are much more effective than the current ’gold standard’ repellent, DEET (N,N-diethyl-m-toluamide).

The researchers trawled through the US Department of Agriculture database of insect repellents amassed over 60 years and containing more than 40,000 chemical structures. They selected a class of compounds called N-acylpiperidines for further investigation as these seemed particularly promising. To identify novel structures with potential repellent activity, the team used an artificial neural network, a computer program that can be ’trained’ to recognise patterns in large, complex sets of data. 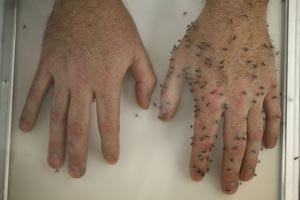 A fearless volunteer demonstrates the effectiveness of DEET as a mosquito repellent. Several of the new compounds were found to keep mosquitos at bay longer than DEET

’From the database we selected 200 acylpiperidines of know repellent efficacy,’ says team member Ulrich Bernier. ’We showed 150 of these to the neural network, asking it to take note of numerous aspects of the molecules - structure, position of atoms, number and type of bonds, electronic and electrostatic properties and so on.’ Having trained the system to recognise a ’good’ repellent, the researchers tested its new-found knowledge by showing it the remaining 50 compounds. It successfully predicted the efficacy of these.

’We then presented the neural network with 2000 molecular structures, and it selected 34 as being good repellents,’ says Bernier. Eleven of these were previously known molecules, while 23 were new and had to be synthesised. They tested the effectiveness of the compounds by applying it to cloth which was then placed on the skin of volunteers who were exposed to mosquitoes.

Several of the compounds were found to retain their potency for much longer than DEET. In one case, for example, the compound remained active for 73 days, against 17.5 days for DEET.

’This was surprising’ Bernier says. ’Over the years I have been sent numerous repellent samples which are never as good as DEET and I have become quite sceptical. But this was impressive.’

Bernier concedes that the system for testing the compounds is imperfect and much more work needs to be done to confirm if any of the new molecules are indeed more effective than DEET for practical use. ’We have selected seven of the compounds for further study, scaling up the synthesis and carrying out more rigorous testing on other mosquito species and with multiple subjects,’ Bernier says.

Mike Birkett, an insect repellent expert at Rothamstead Research in the UK, says, "I do applaud the authors on the study, especially the multidisciplinary approach." Birkett points out, however, that wholly synthetic compounds are viewed with suspicion by the public and that it can be difficult to get approval for their use. ’There are examples of natural products being developed as repellents which, with improvement in formulation, will perform the same as DEET and will be more acceptable to the public.’

Bernier agrees that bringing a synthetic compound through the registration process is far more difficult than with a naturally derived molecule. ’But I have yet to see any long-term efficacy for any of these natural repellents - they require high doses and do not last long,’ he adds. .A lot of our research is aimed at military applications, and soldiers in the field need something that they can trust and know will work.’