US-based Concert Pharmaceuticals has inked its first commercialisation deal granting GlaxoSmithKline (GSK) access to six deuterium-modified drugs which could see Concert making up to $1 billion (?0.6 billion) if all the agreed milestones are reached.

The deal covers three of Concert’s own drugs, including lead drug candidate CTP-518 - a deuterium-modified version of Bristol-Myers Squibb’s HIV therapy atazanavir, which is expected to enter Phase I trials later this year and will likely end up in GSK and Pfizer’s recently-formed HIV joint-venture.

The arrangement will see GlaxoSmithKline pay an initial $35 million to Concert, which includes a $16.7 million equity investment. According to Roger Tung, Concert’s chief executive, the investment has a bought a ’small percentage’ of the company. 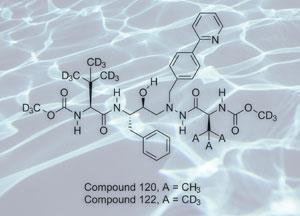 Modifying drugs with deuterium can change their metabolic fate

According to Tung, what is so unique about Concert’s approach is that the company can very delicately modify a drug’s activity and metabolic breakdown, while retaining its selectivity and activity, simply by replacing hydrogen atoms with those of its isotope deuterium.

’Because deuterium has a twice the atomic mass of hydrogen it forms stronger covalent bonds and this changes the rate of bond breakage,’ explains Tung. ’This in turn can translate into alterations into the metabolic fate of the drug, which can express itself in changes of the biological half-life of a drug, increase a drug’s biological availability by protecting it from pre-systemic metabolism, or can change the proportion of metabolites that are formed.’

Concert has so far applied for patents for over 100 deuterium-modified drugs and Tung explained that the company was targeting those molecules they believe they can improve. While isotopic modification could be seen as relatively expensive, he was quick to point out that because the company is targeting molecules that are already available many of the precursors have become easily and cheaply accessible.

’Depending on the size of the molecule we will selectively add anywhere between a handful and 20 deuterium atoms. The effects are relatively unpredictable and will often create surprising structure-activity relationship profiles,’ says Tung.

While some deuterium modifications cause the drug to be metabolised more slowly, others can actually increase the metabolism rate.

During a Phase I proof-of-concept clinical trial, the results of which were published in March this year, Concert showed that a deuterium-modified analogue of GSK’s antidepressant paroxetine maintains its efficacy while reducing the severe interactions that can take place when it is taken in combination with other drugs.

When unmodified paroxetine is metabolised, a small amount of a carbene is produced, which inactivates the liver enzyme CYP2D6. This affects the metabolism of many commonly taken drugs and can lead to serious side effects. The deuterium-modified analogue, CTP-347, does not get metabolised into the carbene metabolite, thus avoiding the problem entirely.

’This really is a new branch of medicinal chemistry and we believe it may be analogous to what happened with fluorine in the 1950s when fluorine was believed to not be suitable for human drugs - now 10 to 15 per cent of all drug candidates contain a fluorine atom,’ says Tung. ’We are the first movers in a very new area of chemistry and we think there will be an increasing number of cases where deuterium will be incorporated into drug molecules which will lead to the development of superior medicines.’