Controlling an organocatalyst with pH

UK chemists have designed an organocatalyst that can be mechanically switched on and off simply by changing the pH. Similar activation-deactivation could be achieved for a wide range of related catalysts using a variety of external triggers, the researchers suggest, including stimuli such as light, temperature or electrical potential. The work opens the possibility of constructing complex sequential catalytic pathways for syntheses involving multiple switchable catalysts.

The catalyst is based on a rotaxane - a mechanically locked molecular architecture consisting of an axle threaded through a macrocycle which is free to shuttle along the axle. Bulky stopper groups at either end of the axle prevent the macrocycle from escaping. The team at Edinburgh University, led by David Leigh, synthesised a rotaxane which incorporates a dibenzylamine/ammonium moiety - a well-characterised type of organocatalyst - in the centre of the axle. Part way down each side of the axle is a triazolium ring. 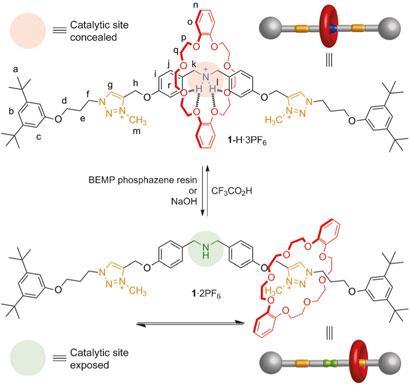 A change in pH can move the macrocycle along the axle, turning catalysis on and off

In acidic conditions, when the rotaxane is protonated, the macrocycle’s preferred binding site is the ammonium group in the centre of the axle. Under these conditions, the macrocycle conceals the central, catalytic region of the axle, rendering the molecule non-catalytic. However, when the molecule is not protonated, the macrocycle prefers to bind at one or other of the triazolium sites - exposing the central portion of the axle and permitting catalysis. The team showed that Michael addition of a thiol to cinnamaldehyde could be catalysed by the rotaxane in its deprotonated state, but not when it was protonated. Deprotonation was achieved simply by introducing sodium hydroxide to raise the pH.

’There are many different catalytic groups that one could put into the axle, and many different ways of switching the position of the ring in rotaxanes, such as by light, electricity or temperature,’ Leigh says. ’This gives us the possibility of assembling common building blocks in a controlled order by switching different catalysts on and off at different times. We have already started to put other catalytic groups in the axles and use other sorts of stimuli for the switching.’

’The demonstration of an organocatalyst which can be switched off and on at will by applying acid and base alternatively shows the power of molecular design and constitutes an elegant example of catalytic activation/deactivation using a mechanically interlocked molecule in the shape of a molecular shuttle,’ says Fraser Stoddart of Northwestern University, US, who pioneered rotaxane chemistry. ’The integration of mechanical movement and catalysis with chemical stimuli takes us a step closer to using integrated molecular systems to influence chemical reactivity. This achievement begs the question - what are the chances of imposing a new brand of stereoelectronic control on the Michael reaction using mechanically interlocked catalysts?’