Solid oxide fuel cells, which generate electricity at around 700?C, may be able to operate at room temperature - thanks to a new layered material that is remarkably efficient at conducting oxygen ions.

A solid oxide fuel cell (SOFC) directly generates electricity by reacting oxygen anions (produced at the cathode from oxygen gas) with a hydrogen rich fuel (at the anode). The efficiency of an SOFC depends strongly on how quickly oxygen ions can migrate from one electrode to another, through a solid ceramic electrolyte.

Yttria-stabilized zirconia (YSZ) is the electrolyte of choice, being mechanically stable and unreactive with an SOFC’s electrodes. But to get the fuel cell working efficiently, very high temperatures (above 700?C) are required - bumping up the costs and startup time of electricity production.

As Jacobo Santamar?a, at the Complutense University of Madrid, explains, cutting down the thickness of the electrolyte to a few nanometres, using modern thin-film growth techniques - and introducing new materials into the electrolyte, such as gadolinium-doped cerium and lanthanum gallates - has helped to improve conductivity, but only to the level of 500?C working temperatures.

He and colleagues in the US and Spain have now made an electrolyte so conductive to oxygen ions that it operates best at a mere 84?C, and has excellent projected conductivity even at room temperature.   ’With our new material, the oxygen ionic conductivity is enhanced up to one hundred million times’, Santamar?a says. 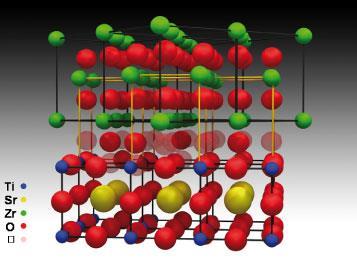 3D model of the YSZ/STO interface, showing oxygen vacancies (shaded red spheres) that give rise to the enhanced conductivity of the new electrolyte

The researchers grew a 1-nanometre thick layer of conducting YSZ sandwiched between 10-nanometre-thick layers of insulating strontium titanate (STO). STO’s crystalline structure mismatches with YSZ’s, leading to disordered ions at interfaces between the two. That, says Santamar?a, accounts for the dramatic rise in oxygen ion flow, as many more gaps (oxygen vacancies) appear at the interface.

The researchers are now planning further experiments that will allow them to understand in more detail what is happening at the interface. The next step, says Santamar?a, is to substitute STO for another material with a crystalline structure more similar to YSZ’s, to investigate the team’s interface hypothesis.