Chemists at the University of Oxford have created a new type of catalyst by attaching two redox enzymes to a microscopic flake of graphite. The system could be tailored to catalyse a range of reactions, the researchers say.

Fraser Armstrong and his co-workers attached two enzymes to graphite: a hydrogenase and a nitrate reductase. When the team suspended the particles in a solution of nitrate and bubbled in hydrogen, the electrons stripped from hydrogen passed across the graphite to the reductase, which then reduced nitrate to nitrite. 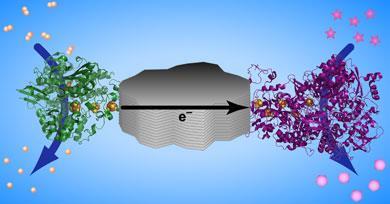 ’What we have done is proof of concept,’ Armstrong told Chemistry World. ’We have shown that we can use an enzyme to release electrons from a simple source such as hydrogen, into a particle of carbon: in this case the electrons are collected by a second enzyme and used to process specific substrates. There are numerous potential reactions that could be done in this way with a range of coupled enzymes.’

The reaction did not occur without graphite, demonstrating that the material was necessary to conduct the electrons between the two enzymes. The experiment was successfully repeated using fumarate reductase in place of the nitrate reductase as electron acceptor to reduce fumarate to succinate.

Stephen Chapman of the University of Edinburgh described the work as ’very neat’. He told Chemistry World that a particularly interesting feature of the work was the demonstration that both enzymes must be bound to the same graphite particle for the reaction to work. ’You need intra-particle electron transfer for efficient catalysis - inter-particle electron transfer doesn’t do it. This is an important control experiment and a pretty cool result.’

Christopher Pickett at the University of East Anglia said, ’In essence what the Oxford group has done is to short-circuit an enzymic biofuel cell and scale it down to the micrometer scale in a very simple fashion. It takes little imagination to think of constructs with nano or photo-nano particles for coupling desirable redox reactions.’