Researchers in France have successfully attached an ’electrical switch’ to a key class of membrane proteins targeted by many drugs. When a ligand binds to the protein - a G-protein coupled receptor (GPCR) - it flips the switch, triggering an easily detected change in current.

The ’switch’ coupled to the GPCR is a membrane-bound ion channel, which control the flow of ions into and out of cells. The coupled system, which directly reveals when a ligand binds the protein receptor, could be used as the basis for a new class of bionsensors, or as a way of screening potential new drugs against different types of GPCR, the researchers suggest

’GPCRs are the largest family of cell receptors found in the human body and are essential for controlling the response of cells to external stimuli and for communication between cells,’ says Michel Vivaudou of the Institute of Structural Biology in Grenoble, who led the research team together with Christophe Moreau. ’Because of this they are a major target for drugs, and around 30 per cent of all drugs on the market are GPCR targets.’

Drug companies use a number of assays to test for binding to GPCRs, including radioactive or fluorescent tags attached to the ligand, or measuring ’downstream events’ that occur when the GPCR is activated. The advantage of the new system, says Vivaudou, is that it would be inexpensive to operate and provide a sensitive and direct measure of a binding event. 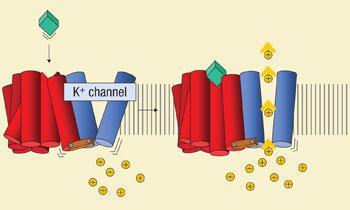 The team genetically engineered a single ’fusion protein’ of a GPCR covalently attached to an ion channel. They found they needed to shorten the sequence of the ion channel by around 25 amino acids to obtain an electrical signal in response to a ligand binding, but successfully achieved an electrical signal with two different GPCRs, demonstrating that the concept is feasible.

The next stage, says Vivaudou, who has applied for a patent on the technology, is to try to embed the protein system into an artificial membrane to create a small, self-contained system for use as a biosensor or in drug screening.

Bob Bostwick, a biochemist who works in the development of in vitro screening assays for AstraZeneca, says that the work represents ’an interesting approach for looking at ligand binding to GPCRs, which could be more sensitive than other technologies, in particular for low-affinity binding and for compounds that do not bind to the classic binding site of the protein.’

However, the method would not detect the pharmacological effect of ligand binding on downstream signals, Bostwick notes, and in any binding assay it would be necessary to run a parallel assay with the ion channel alone, to rule out the possibility that a given ligand was not attaching itself directly to the channel, producing a false positive result.