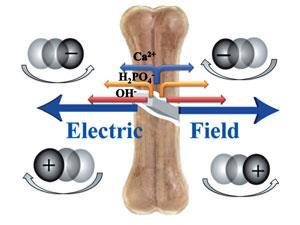 Hydroxide ions travel away from cracks in bones faster than calcium ions. This can be used to deliver drugs to damaged bones

A US team have used drug-loaded nanoparticles to detect and heal tiny cracks in human bones. Their system uses ions leaking from the crack to draw the particles to damaged areas. This may allow better targeted treatment for conditions such as osteoporosis, or could be used to develop self-repairing materials.

The principles behind the system are well known. ‘If you expose a fresh mineral surface to water it will dissolve to some extent and generate ions,’ explains Ayusman Sen from Pennsylvania State University, US, one of the researchers involved. ‘If you have an anion and a cation and one of them diffuses faster than the other that creates an electric field.’ It is then possible to use this field to move charged particles in a particular direction.

Sen and his colleagues have been studying these effects in a variety of materials and found they are particularly strong in bone. Cracks in bone generate a localised electric field because negative hydroxide ions travel away from the crack faster than larger, positive calcium ions. Negatively charged nanoparticles are attracted to the positive end of the gradient, so they move towards the crack.

The team showed that this effect could be exploited to detect and heal damaged areas. To create these bone healing nanoparticles they prepared negatively charged sodium alendronate, which is biocompatible, with an oral drug commonly used to treat osteoporosis. Freshly cracked human bone samples were exposed to the nanoparticles in vitro and fluorescence imaging showed that they accumulated in the cracks.

This allows the drug to be rapidly delivered to precisely where it is needed, Sen says. ‘Typically you take a medication which ends up where you want it to by simple diffusion – this is a more drastic way of homing in on the target site,’ he says. He stresses that there are many challenges to overcome before the technique can be put to clinical use. The next step will be trying this out in a more lifelike environment with competing ion gradients.

‘The really neat thing about the work is that it represents a step towards a potentially viable application,’ says Stephen Ebbens from the University of Sheffield, UK, who also works on self-propelling nano-devices. He agrees that medical uses are still ‘a long way away’, but says that this method of controlling nanoparticles could be used to create self-repairing materials or for directing components around microfluidic devices. ‘Anything that generates this kind of ion gradient could produce this phenomenon,’ he says. ‘Applications using a similar mechanism outside the body might be much easier to realise.’