Spanish scientists have shown how elaborately curved crystalline structures, similar to those typically made by living organisms, can grow from simple solutions of metal carbonates. The work provides potentially important new insights into the phenomenon of biomineralisation, in which organisms control the incorporation of minerals into complex structures such as shells and bones.

A group led by Juan Manuel Garc?a-Ruiz of the Instituto Andaluz do Ciencas de la Tierra has captured on film the growth of an array of smoothly curved crystalline shapes that emerged from a mixture of barium or strontium carbonate and silica in an alkaline medium. 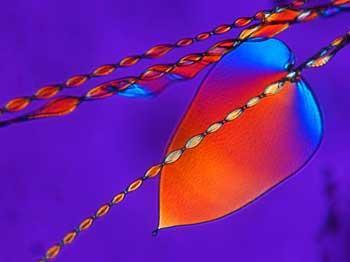 Most natural crystals, such as quartz or pyrites, are faceted solids, Garc?a-Ruiz says. ’But when life uses a mineral, such as calcium phosphate for bones or calcium carbonate for shells, these create curved forms that are forbidden in the world of crystals,’ he adds.

Now, Garc?a-Ruiz and his colleagues have proposed an explanation for how such curved crystalline structures can be spontaneously generated. As the carbonate crystal starts to form, the removal of carbonate from the surrounding solution causes the pH of the medium to drop in the immediate vicinity of the growing crystal. This then favours precipitation of silica, which forms a sheath around the carbonate crystal. The precipitation of the silica in turn raises the pH - promoting crystallisation of the carbonate. The cycle is continuously repeated, with nanocrystals of carbonate being formed and coated in silica, thanks to the oscillating pH at the growing crystal front. 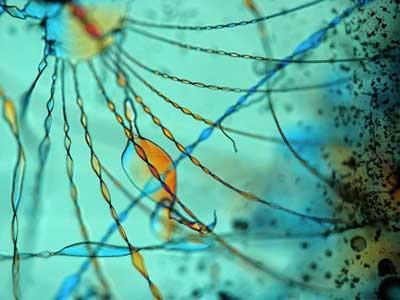 The team’s images reveal that the crystal grows in a series of distinct phases. The initial nanocrystalline composite forms a dendritic structure which resembles a cauliflower. Then, for reasons that are not clear, a flat disc-like protrusion emerges from the structure. This two-dimensional leaf, consisting of partially aligned nanocrystals of silica-encapsulated carbonate, continues to grow outwards until a curl begins to form.

’At a point on the advancing front of this disc a curl appears,’ says Garc?a-Ruiz. ’This curl travels along the edge like a surf wave.’ The curl introduces a third dimension to the structure, and when it meets another curl they can interact in a variety of ways, from which different curved 3D patterns emerge, such as helicoids. The final form of the crystal depends on a variety of factors, such as the diameter of the curl and the velocity of the advancing front.

Two big questions remain to be answered, says Garc?a-Ruiz: how and why a two-dimensional protrusion emerges from the dendritic growth of the nanocrystals, and what instigates the formation of a curl at a given point on the edge of this disc.

Stephen Mann of the University of Bristol in the UK is a leading authority
on the self-assembly of crystalline materials. ’These phenomena have been seen extensively, but what this work has done is present a nice, coherent explanation for a whole range of structures based on an underlying mechanism of pH oscillation along with macroscopic folding. Together these produce a library of shapes which on
the face of it appear to have little connection between them.’