What discoveries caused the biggest buzz in chemistry labs in 2011? With the help of an expert panel of journal editors Chemistry World reviews the ground breaking research and important trends in this year’s crop of chemical science papers.

Beginning at the beginning

There were plenty of discoveries that looked at how life may have got started on this planet, one of the most poignant being the rediscovery of forgotten samples from Stanley Miller’s lab1. The forgotten samples from a 1958 experiment, analysed by Jeffrey Bada of the University of California, Santa Barbara, US, who was one of Miller’s former students, suggest that volcanic plumes may have played an important role in the synthesis of biologically relevant molecules. 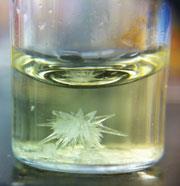 Meanwhile, several teams were trying to work out how those prebiotic molecules found themselves encased in cells in the first place. James Boncella, at the Los Alamos National Laboratory in the US, made primitive vesicles to investigate how the first cell-like structures might have harnessed energy2. The team made the vesicles from fatty acids and polyaromatic hydrocarbons (PAHs) and trapped metal ions in the central void. The PAHs acted as photocatalysts, reducing the metal anions before being regenerated by molecules outside the cell, which acted like a proton source. However, Stephen Mann, at the University of Bristol, UK, created some more outlandish protocells, including one made of inorganic silica membranes3. Mann’s team functionalised silica nanoparticles with silanol and dimethylsilane groups, making them both water loving and hating, and showed that the silica protocells are permeable and can host functioning enzymes.

There were also several papers that suggested different origins of chirality for life on Earth. Spanish chemists, led by Crist?bal Viedma at the Complutense University in Madrid, enantioenriched the amino acid valine by continuously sublimating a racemate of the compound, which changed the way it recrystalised4. Later in the year, Viedma also showed that boiling a supersaturated solution also perturbs the crystallisation process, resulting in a single chiral phase5. Over in the US, Donna Blackmond’s team at Scripps Research Institute suggested another reason for the origin of life’s chirality using chemical amplification and the well known fact that above a certain enantiomeric excess crystallising mixtures favour crystals of the same enantiomer6. They showed that in the presence of just a slight enantiomeric excess (1%) of proline, RNA precursors would crystalise at 100% enantiomeric excess. So a tiny imbalance could have occurred randomly and once a critical point was reached, life was set with L-amino acids and D-sugars.

The RNA world hypothesis also got a boost this year with work from Philipp Holliger’s team at the Medical Research Laboratory in Cambridge, UK. The hypothesis, first suggested by Francis Crick in 1968, suggests that life on Earth began with a self-replicating RNA molecule but has remained unproved. Holliger went back to a potential RNAzyme from the 1990s that was considered a dead end and, by introducing evolutionary pressure, eventually found an RNA molecule that could replicate RNA chains up to 93 bases in length without any other machinery7.

From RNA to DNA, which has also been played around with this year. In Germany, Rupert Mutzel’s team from the Free University of Berlin developed a ’genetic firewall’ that could prevent genetically engineered DNA from crossing back into wild type species8. The group sped up the evolution of Escherichia coli so that it used a chlorinated analogue of thymine, chlorouracil, as one of the base pairs in its DNA and could survive without thymine. Eventually Mutzel would like to develop a completely separate but parallel set of life that cannot return to using thymine.

If replacing one of the bases of DNA wasn’t enough, what about adding two new ones? Steven Benner, credited by some as the man who kick-started the field of synthetic biology, created two new base pairs that look similar to the natural ones but have orthogonal hydrogen bonding patterns9. The new GATCZP DNA is already replicated in artificial cells and Benner is now working on introducing it to E. coli. That could form the basis of another separate form of synthetic life.

Meanwhile of course, we can’t talk about DNA and not mention Felisa Wolfe-Simon’s work at the Nasa Astrobiology Institute in the US. She caused a media storm when she suggested that GFAJ-1 bacteria from Mono Lake in California were using arsenic in their DNA backbone rather than phosphorus10. The adaptability of the organism to such extreme conditions is impressive but the fundamental claim that arsenic replaces phosphorus in DNA is fiercely contested and has yet to be been replicated.

Molecular design and screening took some interesting turns this year, including a neat piece of work from John Hartwig’s lab at the University of California, Berkley, US, who used a 96 well plate and a gas chromatograph-mass spectrometer (GC-MS) to explore multiple reaction combinations simultaneously and discover new catalytic reactions, including a copper-catalysed alkyne hydroamination and two nickel-catalysed hydroarylation reactions11. The simplicity of the equipment needed means that anyone should be able to use the approach to discover new reactions.

Screening was also used to predict the perfect metal-organic framework (MOF) for methane storage12. Theoretical chemist Chris Wilmer at Northwestern University Illionois, US, screened a library of over 100 building blocks to make nearly 140,000 theoretical MOFs, saving years of trial and error. Wilmer’s collegue and synthetic chemist Omar Farhar then picked one of the best potential candidates and made it. The resulting MOF showed the best methane absorption yet.

But what about drug manufacture? Rebecca Goss’ group at the University of East Anglia, UK, used genetic methods to choose and direct the biosynthesis of antibiotics from the pacidamycin family to create new pacidamycins13. The team transplanted a core set of pacidamycin biosynthesis genes into Streptomyces lividans plus two outlying genes responsible for key structural variations. This should allow a focused library of antibiotics to be developed to combat antibiotic resistance

As well as biosynthesis, total synthesis has continued to improve. Christopher Vanderwal of University of California, Irving, US, reduced the total synthesis of strychnine down to just six steps from the previous best of 14 steps14. And from making to breaking, Christopher Bielawski at the University of Texas at Austin showed how to ’unclick’ a click chemistry reaction by breaking a 1,2,3-triazole into an azide and an alkyne using ultrasound15.

David Leigh at the University of Edinburgh, UK, solved a knotty problem this year, presenting us with the first pentafoil knot - one that crosses itself five times16. Instead of looping together a long chain like string however, this problem had to be solved by assembling five shorter strands around a central chloride ion and then lashing them together using metal ions. 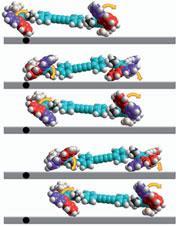 Ben Feringa, at the University of Groningen in the Netherlands, also came up with some neat covalent chemistry, using his molecular motor in a catalytic system to control the chirality of the product17. This could be a useful tool for creating catalysts that can be controlled to perform multiple functions in sequence and adds to the potential applications for molecular motors. Not content with that though, Feringa finished the year with the best looking molecular car yet18. The nanocar consists of four of Feringa’s motors as wheels that turn with every electrical pulse, which induces a isomerisation of the central C=C double bond in the motor. It’s not the smoothest ride yet as sometimes all four wheels don’t work in concert, but the car has both forward and reverse gears and more importantly sticks to the ’road’, something that’s quite tricky when you’re working with such tiny vehicles.

Even before we all had to brush up on our quasicrystal knowledge following the Nobel prize announcement, Valeria Molinero and colleagues at the University of Utah, US, performed some computer simulations that suggest that water could adopt a ’forbidden’ quasiperiodic state with 12-fold symmetry19. All quasicrystals to date have been two or three component so the idea of a one component quasicrystal is quite exciting, but if it does happen it’s only at incredibly high pressures so it’ll be a while, if at all, before it’s made in reality.

Meanwhile, back at more normal pressures Philip Salmon of the University of Bath, UK, used isotopic substitution of oxygen to take a closer look at the molecular structure of water20. Neutron diffraction allowed Salmon to study the position of atoms in water, whose structure is still relatively poorly understood due to the role of quantum effects. Salmon’s findings could change the way water is modelled with extra bond flexibility needing to be programmed in.

And if that wasn’t enough, a US team led by Harvard University’s George Whitesides showed that the structure of water in the binding pockets of proteins can cause hydrophobic effects that are different to those currently used in pharmaceutical models - that of the lock-and-key model21. In some situations it is not entropy that dominates but enthalpy, and this should be taken into account for predictive models.

To finish this selection, what about some of the many ways chemists are trying to generate power for a post fossil fuel world. At the Spring ACS meeting in Anaheim, US, Dan Nocera from the Massachusetts Institute of Technology, US, presented his artificial leaf that splits water when exposed to UV light. Crucially, while Nocera’s device produces less energy than other options, it costs less than $50 (?31) to manufacture compared with around $12,000 for current commercial devices, making it the ’fast food of energy production’, he says.

Nocera’s leaf can apparently work with human waste water, but what about other ways of powering things with pee? A team led by Ioannis Ieropoulos and John Greenman at the Bristol Robotics Laboratory in the UK have developed microbial fuel cells that use bacteria to break down urine and produce electricity22. So, instead of using energy to clean water at treatment plants, you could do it at home and generate power. Of course, the collection of the urine could be a bit awkward so what about going upstream?

The agave plant is well known as the plant that makes tequila, but David King’s team at the University of Oxford’s Low Carbon Mobility Centre, UK, has shown that it can also be used as a feedstock to make bioethanol23. Crucially, unlike other feedstock plants agave thrives in arid conditions and would not need arable farmland to be given over to its production. Perhaps more importantly, tequila supply should be unharmed.

And that’s it for another year, let’s raise a glass to what 2012 will bring.