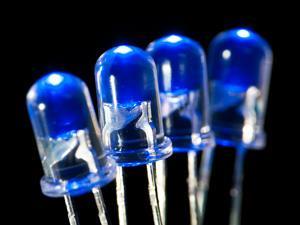 A new, highly efficient fluorescent material for blue organic LEDs that is completely free of metals has been developed by researchers in Japan. The team also believes the design principles they used will allow other researchers to produce new, high-efficiency LED materials.

For the production of a multi-colour or white LED, emission of blue light is crucial – the 2014 physics Nobel prize was awarded for the development of blue gallium nitride LEDs. Organic LEDs (OLEDs) have multiple advantages over inorganic LEDs for flat panel displays and mobile phones as they are ultrathin, lightweight and flexible. Unfortunately, the most efficient OLEDs currently available use organometallic complexes of metals such as iridium and platinum. These are expensive and blue light-emitting complexes can become unstable. Researchers are keen to produce OLEDs free of these metals. Unfortunately, such materials are usually highly inefficient as three-quarters of the quantum states created cannot emit photons.

For the past five years, Chihaya Adachi and colleagues at Kyushu University in Japan have been working on a process called thermally activated delayed fluorescence, which allows room-temperature heat to convert non-emissive states into emissive ones. In 2012, Adachi’s group produced a green LED using this process. Now, in two further papers, his team has extended this. Earlier this year, it unveiled a blue OLED with an external quantum efficiency (the proportion of electrons passing through it that produce a photon) of 20%, smashing a previous record of 11% for a metal-free blue OLED and getting very close to inorganic LEDs quantum efficiency.1 The team now reveal a set of design principles dictating these molecules’ efficiencies, demonstrating them with a series of emitters.2

For thermally-activated delayed fluorescence to work effectively, they show that the emissive and non-emissive states have to be as close as possible in energy. To achieve this, they calculate, both states must be as delocalised as possible and yet still well separated from each other. The researchers then used density functional theory to design molecules in which these conditions would be satisfied. They tested a series of carbazole–triazine derivatives finding, as predicted, that the one which best combined a highly delocalised non-emissive state with a small separation between the energies of the two states was the most efficient emitter. ‘Based on our guidelines, we expect many researchers will develop novel thermally-activated delayed fluorescence materials,’ says Adachi. Researchers now need to increase the efficiency of the devices by reducing the voltage needed to drive electrons through them.

‘In order to have a common understanding of how we should design our molecules, we need to understand first how the properties depend on the specific structure,’ says optoelectronic semiconductor expert Sebastian Reineke of the Technical University of Dresden in Germany. ‘In this regard, I would consider this one of the future key publications in the field.’