Volatile halogenated hydrocarbons from a huge salt lake could have helped wipe out life on Earth 250 million years ago, say researchers

Life on Earth was all but obliterated around 250 million years ago - but no-one knows why. Now, a team of international scientists has put forward a new idea: that the planet’s demise was due, at least in part, to millions of tonnes of halogenated gases being released by a giant salt lake the size of France.

Over the course of the Earth’s history there have been several so-called mass extinctions events. The one that wiped out the dinosaurs, 65 million years ago, is widely thought to have been caused by the impact of an asteroid on the Earth. However, the causes of the biggest event, in the Permian Age some 250 million years ago when 90 per cent of life on Earth was destroyed, remain a mystery. Asteroids and volcanic activity are among leading candidates, but strong evidence is thin on the ground.

A research team led by Ludwig Weissflog from the Helmholtz Centre for Environmental Research in Germany has suggested that a giant hyper saline lake called the Zechstein Sea, which was located roughly at the site of present-day Central Europe, could hold at least part of the explanation.

The researchers, from Russia, Austria, South Africa and Germany, took samples from existing salt lakes in Russia and South Africa and measured a number of volatile halogenated hydrocarbons coming off the samples, produced by the action of bacteria and algae. The gases included chloroform, trichloroethene and tetrachloroethene. If proportionate quantities were being released by the Zechstein Sea, the scientists say, it could have had catastrophic consequences for the environment. 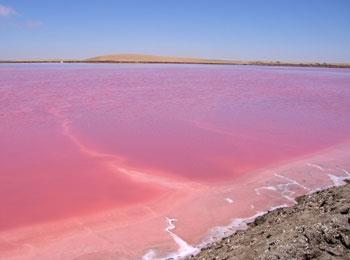 Large areas of the hyper saline Zechstein Sea could have looked like this. The pink colour would probably have been caused by microbes with an extreme preference for salt

According to team member Karsten Kotte, the compounds could have had two effects. ’Firstly, these halogenated compounds can destroy the ozone layer, increasing the amount of UV light reaching the Earth’s surface having a direct effect on the health and mortality of plants and animals,’ he says. ’Also, the compounds can accumulate in plants and form precursors to tricholoracetic acid, a very efficient herbicide.’ In this way, plants surrounding the sea could have died, increasing desertification and the salinity of surrounding soil, which in turn could have then released more chlorinated volatiles.

’We are not necessarily saying that these effects accounted entirely for the extinction event, but that this sort of process could have played a significant role in conjunction with other factors such as volcanic activity,’ Kotte says.

Kotte concedes that there is little hard contemporary evidence supporting the theory, but says he and his colleagues hope to stimulate debate and encourage people to think more broadly about possible factors that could have caused the mass extinction.

One expert who remains to be convinced is geologist Richard Twitchett at the University of Plymouth in the UK. ’There is no way to assess the levels of these gases in the Late Permian atmosphere from the rock record and therefore no way to test this hypothesis’ he says. ’This is mere speculation.’

Paul Wignall, professor of palaeoenvironments at the University of Leeds in the UK is also sceptical. ’The Zechstein Basin and its salts predate the end-Permian extinctions by at least a million years,’ he says, adding, ’there have been other giant salt basins in the geological past, for example in the mid-late Jurassic, when there were no associated extinctions.’