Analysing fatty residues absorbed by 6000-year old pots has revealed a historical menu that challenges widely held views on European civilisation’s development. Oliver Craig, from the University of York, UK, and colleagues investigated vessels from Danish sites where humans used pottery before and after becoming farmers. Pre-farming pottery use is unusual in Europe, and allowed Craig’s team to examine the theory that practices like fishing were completely dropped when agriculture was adopted.

Farming spread rapidly across northern Europe around 4000BC and much previous evidence suggested this altered diets rapidly and comprehensively. ’People thought it changed everything from the way people live their lives to the types of pots they’re making,’ Craig says. ’We wanted to test that by extracting lipids from pottery dated before and after the first arrival of farming.’

Lipids from food stored or cooked in unglazed cooking pots can be trapped in the ceramic matrix and preserved for millennia. Craig’s team were able to extract lipid residues in microgram amounts from the ceramic and characterise them using gas chromatography-mass spectrometry techniques. The researchers studied isotope ratios found in carbonised surface deposits on 100 of 220 vessels recovered from the Danish sites. They also investigated isotopic and structural characteristics of absorbed lipids preserved in 133 vessels. 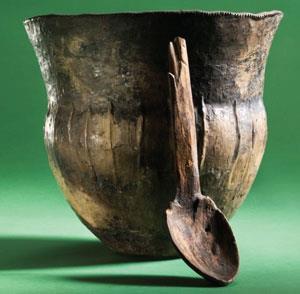 Residues from pottery fragments from coastal locations showed higher proportions of carbon-13. This indicates they contained seafood, as compounds originating from ocean environments are enriched in carbon-13, compared with their equivalents from terrestrial environments. Around one in five pots from coastal sites had also absorbed omega-(o-alkylphenyl) alkanoic acids. These compounds are derived from long-chain polyunsaturated fatty acids only found in aquatic organisms, and are typically formed at high temperatures during cooking.

These patterns were seen across pots used before and after the agricultural transition. ’Even in this new style of pots that come in with agriculture, we’re also seeing alkylphenyl fatty acids,’ Craig says. ’There are several that are also enriched with carbon-13, which suggests that it’s marine foods. So there’s a continuity in the use of pottery despite the arrival of farming.’

Douglas Price, director of the laboratory for archaeological chemistry at University of Wisconsin, US, notes that this supports the case that fishing continued after farming arrived. Existing data include remains of weirs and other fishing equipment, as well as analyses of carbon isotopes in human bone collagen. ’The information from the pottery residues adds another line of evidence to the argument that Neolithic diets were not totally terrestrial or domesticated,’ he says.

Craig now aims to use these type of techniques to unravel even greater mysteries. ’Why did people invent pottery in the first place?’ he asks. ’Certainly it’s nothing to do with farming as once thought. We’re hoping to answer this by reconstructing their use through extracting and analysing lipid residues.’