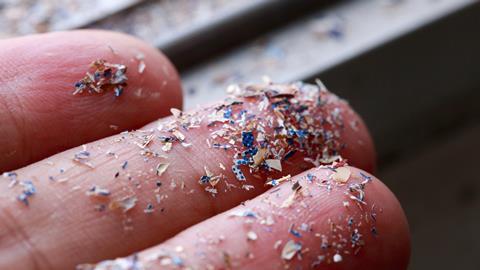 Discovery of microplastics in people raises concerns about health implications

Microplastics have been detected in living people’s lungs for the first time. The lung tissue samples were taken from 11 individuals who had surgery at a hospital in Hull, UK.

The discovery adds to concerns about microplastic contaminants in the environment, but it was not a surprise to researchers in the field. In 2021, Brazilian pathologists found polymeric particles and fibres in lung tissue from 13 of 20 adults undergoing autopsy in São Paulo. And in February, researchers in the Netherlands reported plastic pollutants in the blood of healthy volunteers.

Microplastics form from the fragmentation and disintegration of plastics in furniture, packaging, clothing, disposable items, electronics and more. Usually defined as particles below 5mm, these can be inhaled and potentially cause harm. The most frequently detected polymers in the Brazilian study were polyethylene (PE) and polypropylene (PP).

In 11 of the 13 UK patients, microparticles – 39 in total – were detected using infrared spectroscopy. Twelve polymer types were recorded, with PP, polyethylene terephthalate (PET) and resin most abundant.

‘We identified microplastics in all regions of the lungs,’ says Laura Sadofsky, respiratory biologist at Hull York Medical School at the University of Hull, who led the study. ‘We expected to find microparticles in the lung tissue, but not the larger sizes lower down in the airways.’

This expectation came from studies she and others had done that showed microparticles are in the air we breathe – in quantities that initially surprised Sadofsky. In 2021, her team found on average 1400 microparticles per day, mostly PET, in the air of 20 households. In a later study outdoors, the researchers detected on average more than 3000 microparticles daily – especially PE and nylon – for every square metre of ground they sampled. The team concluded that people were often exposed to significantly higher concentrations within their homes than outdoors.

One source of domestic plastic microparticles is textiles. Each garment is estimated to release thousands of fibres per wash. So ubiquitous are airborne microplastics that they contaminate samples even in controlled laboratory environments. ‘We struggle so much in the lab to keep things clean and free of microplastics, because it is floating around and falling off of people,’ says Stephanie Wright, a microplastics researcher at Imperial College London, UK. 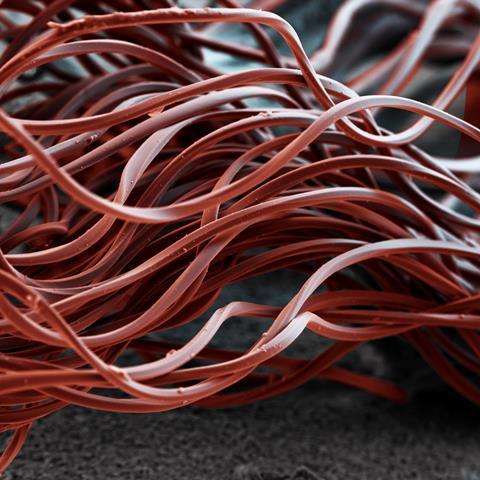 This coloured scanning electron micrograph shows polyester fibres, which are some of the most common ones found in people’s homes

But the crucial questions on whether the type and quantity of particles found in human lung tissue can cause harm remains unanswered. Wright notes that decades of air pollution research indicate certain size fractions to be important, namely PM2.5 and PM10 (defined as particles with diameters of 2.5 and 10µm, respectively). Exposure to such pollutants is linked to premature death.

There are also links between inhalation of synthetic fibres in textile workers and lung diseases. ‘Around 30% of people who work in the nylon flocking industry have respiratory problems, lung disease,’ says immunologist Barbro Melgert at the University of Groningen, Netherlands.

In the Dutch study, blood samples taken from 22 healthy volunteers revealed on average 1.6µg of plastic particles per millilitre of blood. It is possible the particles had moved into the bloodstream from the gut. In Wright’s view, the mean concentration is surprisingly high given that animal studies suggest that only 0.4% of ingested particles can cross the gut–blood barrier.

But Marja Lamoree at Vrije University Amsterdam in the Netherlands, who led the study, recommends caution when interpreting the results, as these are the first measurements from a small number of individuals. ‘This can be interpreted as an estimate of what might be expected in future studies, and a helpful starting point,’ she says.

For now, the field brims with questions, not answers. ‘We don’t know if microplastics cause any problems in our lungs,’ says Melgert. In recent experiments, that aren’t yet peer reviewed, she added nylon and polyester fibres to lung organoids and saw signs that they impact lung stem cell development. Melgert suggests that developing lungs or healing airways might be more affected.

Early last year, a group in Italy detected the first evidence of microplastics in human placentas using Raman spectroscopy. A dozen microplastic fragments, three of them pigmented PP, were found in four out of six placentas.

Since then, Phoebe Stapleton and colleagues at Rutgers University in New Jersey, US, inserted polystyrene particles into the lungs of pregnant rats. 24 hours later, the particles had made their way into the animals’ placenta, lung, heart and spleen, as well as into the fetuses’ livers, lungs, kidneys and brains. Though the infused particle dose was high, Stapleton believes people are no less susceptible.

Studies show that as the microplastic particles’ size decreases, their relative abundance in the environment increases – meaning there are far more of the tiniest particles around. And these are viewed with concern. ‘The smaller the particle the greater the likelihood of it bypassing epithelial barriers or interacting with cells,’ says Wright. ‘But they’re obviously hardest to detect as well.’

The Hull study had a size limit of 3μm, close to the detection limit for infrared spectroscopy. ‘The numbers for most studies are above 10 microns in size, just because the analytical method employed didn’t permit anything smaller,’ says Wright. No studies have looked at particles in the nanometre range

Once particles go deep into lungs, they are difficult to clear. They may be engulfed by immune cells, but not consumed as are microbes. ‘For microplastics, I think they will never be digested [by cells] because we just don’t have the enzymes or machinery to get rid of them,’ says Melgert. This means they may accumulate over time.

One added complication is that particles contain plasticisers and other compounds, including known endocrine disruptors. They also can become coated with bacteria, viruses, metals or organics, which could add to toxicity. ‘These particles had a life before they got into the lungs and can have absorbed different chemicals onto their surface,’ says Stapleton.

Melgert is not surprised by reports of microplastics in human tissue. ‘On a sunny day, look towards the window and you will see the amount of dust in the air. There must be microplastics there going into your lungs.’

She suggests keeping dust to a minimum at home, vacuuming well and allowing fresh air in. Meanwhile, she anticipates many more studies on microplastics and their impact on people.