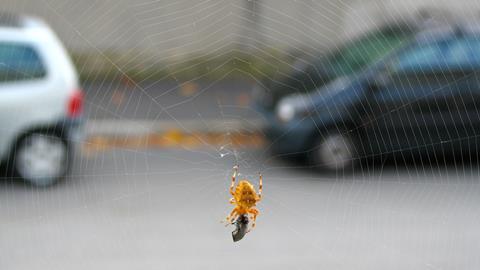 Spider webs are a good barometer of the amount of microplastics in city air, according to a new study out of the University of Oldenburg in Germany. Although previous research has shown that pollutants like heavy metals and magnetic particles can become trapped in spider webs, nobody has examined these natural structures for microplastics until now, explained geochemist Barbara Scholz-Böttcher, who headed the study.

The University of Oldenburg team collected spider webs from the upper area of semi-covered bus stops located along roads with varying traffic levels in the north-western German city of Oldenburg. The goal was to determine whether microplastics could be detected and if certain distribution patterns could be identified. The researchers identified fibres, presumably from textiles, as well as soot particles.

These samples were heated at very high temperatures in the absence of oxygen, and the resulting plastic fragments were identified using GC–MS. The team found that all the spider webs they had collected were contaminated with microplastics, and in some cases the plastic content even accounted for a tenth of the total weight of a web. Almost 90% of the plastic detected consisted of poly(ethylene terephthalate) (PET), poly(vinyl chloride) (PVC) and material from car tyres. The proportion of tyre debris in the webs varied greatly, depending on the traffic on the adjacent road. It also appeared that the abrasion of road markings contributed significantly to microplastic load along roads.

The team concluded that examining spider webs is a fast and inexpensive biomonitoring approach that can be used to screen for hot spots of microplastics pollution that require further detailed human health and ecological risk assessment.