Carbon dots help sniff out nanoplastics in the air 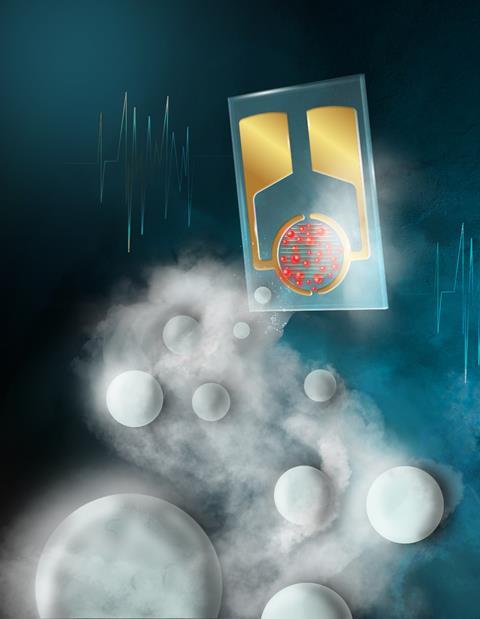 An electronic nose has been developed that uses colourful carbon dot films to detect and quantify nanoplastics in the air. The work, led by chemist and nanotechnology researcher Raz Jelinek from Ben-Gurion University, Israel, was presented at the autumn meeting of the American Chemical Society (ACS).

The new research builds on earlier work that Jelinek was involved with creating a sensor capable of detecting bacteria by the gases that they release. Jelinek’s team wondered if this simple and inexpensive carbon-dot-based technology would be able to detect nanoplastics – plastic particles less than 1µm wide – in the air.

Carbon dots don’t generate a signal on their own. But when a chemical from the air adsorbs to the dot their electrical capacitance changes, and that change is detected by the electronic nose.

The researchers made the carbon dots by heating a carbon source at relatively low temperatures for several hours. The heating process turned the carbon-containing material into colourful, and often fluorescent, nanometre-size particles. They then used the dots to create a film that formed the basis of their sensor. Changing the starting material gives the resultant carbon dots different surface properties meaning their affinity for different chemicals varies.

Jelinek and his colleagues chose carbon dots that would adsorb common types of plastic – polystyrene, polypropylene and poly(methyl methacrylate). The team then aerosolised nanoparticles of these plastics and when their electrodes coated with carbon-dot films were exposed to these minuscule airborne plastic particles, the researchers observed signals that were different for each material.

‘Because nanoplastics are such small, tiny particles, they attached quite easily to our sensor and generated signals – that was the breakthrough,’ recalled Jelinek. Beyond detecting airborne nanoplastics, the new sensor is also able to determine their types, amounts and sizes, he explained. This is because the changes in capacitance are an extremely sensitive measure of the particles that adsorb to the carbon dot films.

‘When the carbon dots capture a big particle of plastic, the signal generated is different from the one generated by a small plastic nanoparticle,’ Jelinek said. ‘Similarly, when you take from the air plastic from one type of polymer – let’s say polypropylene – it generates a capacitance signal which is different from another plastic, for example polyethylene or polystyrene.’

Jelinek hopes that his team’s sensor can be used as an effective platform to monitor the presence of dangerous nanoplastics in air. He emphasised that this is important because these materials are so tiny that they can penetrate the body’s protective layers, specifically the blood-brain barrier.

‘This is very exciting science, and the ability to detect and identify nanoplastics offers a new potential tool for environmental monitoring,’ states Vince Rotello, a chemist and nanoparticle researcher at the University of Massachusetts in Amherst, US. He says he looks forward to seeing how the system works in the much more complex and ‘gunk-filled’ real world that contains multiple plastics and complex aerosols, as well as smog.