Researchers in Italy have investigated how polystyrene nanoparticles interact with human ubiquitin, a regulatory protein found in most tissues.1 Their study showed that nanoplastics change the structure of ubiquitin and disrupt cell ubiquitination processes, which could have implications for human health.

Nanoplastics and microplastics have diameters of less than 100nm and 5mm, respectively, and are formed when plastic materials fragment. As well as being found in soil, oceans and freshwater, nanoplastics have been detected in food, drinking water and the air. It is still largely unclear exactly how nanoplastics might affect humans, but we already know that they are able to enter cells and interact with various biomolecules due to their size.

Earlier this year, research showed that incubating human plasma with nanoplastics resulted in plasma proteins uniformly surrounding the nanoplastics to create what is known as a protein corona.2 Such interactions can affect the proteins’ original function because surface residues that normally define the biological identity of the protein become hidden. Inspired by that study, a team led by Maria Emanuela Errico from the National Research Council of Italy and Roberto Fattorusso from the University of Campania were interested to understand how ubiquitin would behave in a similar scenario. ‘Humans, like any other living organism, are continuously exposed to nanoplastics, spread through the biosphere,’ says Errico. ‘Therefore, the safety issues and the study of plastic nanoparticle toxicology starting from their interaction with such a ubiquitous protein are pressing.’ 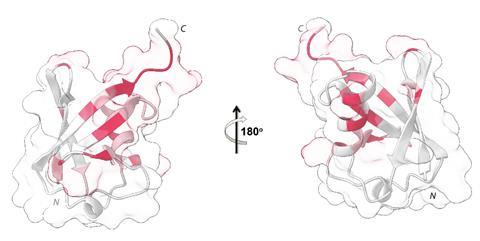 Ubiquitin is a small protein with 76 amino acid residues. A process called ubiquitination sees ubiquitin added to other proteins where it acts as a tag, marking them for a variety of cellular signalling and proteasomal degradation pathways. ‘Ubiquitin impairment has clear implications on human health and our study clearly opens routes for future investigations in the field of plastic toxicology,’ explains Fattorusso. Moreover, many neurodegenerative and oncogenic diseases relate to ubiquitination errors.

Next, they tested the effects of the polystyrene nanoplastics on HeLa cells. They found that the nanoparticles could enter the cells and reduce the level of ubiquitination at a cellular level.

‘The main insights are the mapping of the residues involved in the protein unfolding and if this can be tracked for those proteins directly attached to the polystyrene nanoplastic surface versus those in outer layers of the corona that would be a huge advance – and the current work goes some way towards this,’ comments Iseult Lynch who researches how nanoparticles interact with biological entities at the University of Birmingham, UK. However, Lynch also highlights some limitations of the study: ‘Whether this protein binds in the presence of other proteins, such as would occur in the body is unclear – competitive interactions might displace the ubiquitin from the polystyrene nanoparticles surface and would most likely reduce some of the unfolding effects.’

Errico and Fattorusso anticipate that more proteins might be affected by nanoplastics. ‘Our work provides a new framework to characterise such interactions and may define benchmark characterisations needed to investigate the effects of nanoplastics on a given protein,’ adds Gaetano Malgieri, another member of the team from the University of Campania.