Flexible electrodes have been created that dissolve harmlessly inside the brain after use. The US researchers that developed them believe that they could be used to pinpoint the source of epileptic seizures or monitor a patient’s recovery after surgery before dissolving away, thereby removing the need for further surgery to extract the electrodes. 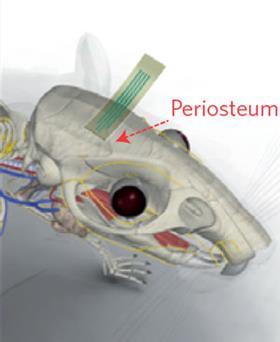 Placed below the skin and onto skull (periosteum), the electrodes can record brain activity

For severe, drug-resistant epilepsy, surgeons sometimes remove or ablate the area of the brain that gives rise to a patient’s seizures. To find out precisely which part of the brain is responsible, electrodes are often surgically implanted to monitor the brain’s electrical activity. If a single region that can be safely removed is found, removal can sometimes be achieved using heat or laser ablation to burn away the tissue. At present, however, further surgery is needed to remove the electrodes.

Researchers led by neuroengineer Brian Litt of the University of Pennsylvania and materials scientist John Rogers of the University of Illinois have designed two new bio-resorbable neural electrodes. The first is a simple design using pads and connecting wires made from highly-doped silicon nanomembranes, insulated with silicon dioxide and mounted on a substrate of the flexible polymer poly(lactic-co-glycolic acid). The second is a more sophisticated 64-electrode array using active electronics to collect signals from a larger number of points. Both electrodes recorded seizure-like neural activity in rats just as well as clinically approved electrodes, working well for up to 33 days before failing suddenly. In vitro tests suggest that the devices should dissolve harmlessly in the fluids of the brain within six months.

The researchers now have more active interventions in their sights. ‘We’re looking to go beyond sensing to electrical stimulation,’ says Rogers. ‘There are lots of people who are looking at different ways to stimulate the brain to treat Parkinson’s disease and even epilepsy using patterned, localised stimulation.’

‘I regard this as a major advancement in the state of the art of neural interfacing,’ says engineer George Malliaras of the St Etienne School of Mines in France. ‘Rogers is known for his work on transient electronics. I’ve been waiting for this to be applied in neural interfacing. There are plenty of applications for this.’

Neurosurgeon Jeff Ojemann at the University of Washington, US, agrees: ‘We have increasing understanding of the benefits of recordings directly from the brain’s surface,’ he says. ‘These are going to be increasingly important for the treatment of a wide variety of diseases … all of these could benefit from an easier way of recording.’ He cautions, however, that more research is needed on precisely what happens to the materials after the electrode has dissolved, and whether they cause any long-term effects.