Computing giant IBM and researchers in Singapore have developed a molecule class that they have shown help cells resist 11 different viruses, from Ebola to flu.1 Although they are studying whether the polyethyleneimine (PEI)-based ‘antivirus’ polymers could become drugs, they’re initially targeting wipes or detergents for better hygiene. 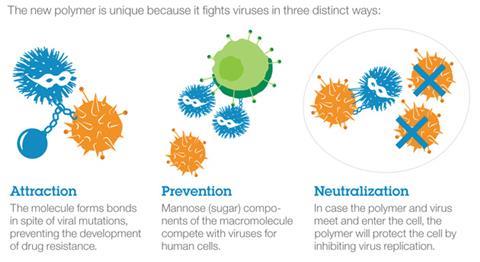 Bleach and alcohol rapidly evaporate, but antivirus polymers don’t, explains James Hedrick from IBM’s Almaden Research Centre in San Jose, California. ‘The polymers will remain and function until wiped off with water, and there’s much less skin damage,’ he says. This format is limited to viruses that survive outside our bodies in moisture, elaborates Yi Yan Yang from the Institute of Bioengineering and Nanotechnology (IBN) in Singapore. However, it should still stop reproduction of deadly diseases like Ebola and common ones like enterovirus 71, the ‘hand, foot and mouth’ virus often found in childcare centres, she adds.

The approach emerged from IBM’s nanomedicine polymer programme, which builds on research that originally identified materials carrying electrical charges that enabled finer-scale etching of transistors onto silicon chips. In 2011 IBM and IBN adapted these into antibacterial ‘ninja polymers’.2 In that work, positively charged polymers attached to the surface of certain bacteria that, unlike human cells, are negatively charged, disrupting their cell walls and bursting them.

That positive charge is one of three different strategies the new polymer class uses to stop viruses before they enter and hijack cells. It brings PEI-based polymers near to negatively-charged areas, either areas on cells that viruses target, or areas on viruses’ outer surfaces that otherwise attach to and penetrate cells. The second strategy involves mannose sugar groups attached to the PEI polymer backbone that similarly draw it towards both cells and viruses through multiple hydrogen bonding interactions. In the third strategy, amine groups on the polymer neutralise the local acidic environment that viruses need to multiply. The various ways in which these strategies work should mean the polymers still function even if viruses mutate. 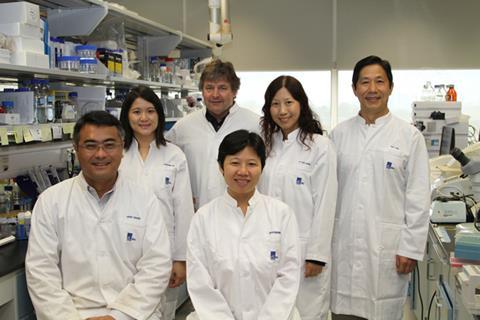 © Institute of Bioengineering and Nanotechnology

Yang and Hedrick’s team tested antivirus polymer compositions against viruses in cultures of isolated cells, finding different mannose contents optimal for the various virus types. Polymers stopped reproduction at lower doses than existing antivirals, notably stopping dengue fever at a fiftieth of the concentration of the drugs used for comparison. Beyond their potency and versatility, the different polymer types were also non-toxic to cells used in the tests.

Macromolecular chemist Greg Tew from the University of Massachusetts in the US says that he’s a ‘big fan of this work and this approach’. ‘Synthetic macromolecular therapeutics, in which the polymer itself is largely responsible for the biological activity, not in which known drugs are attached to a polymer backbone, are likely to provide a new tool for treating human diseases,’ he says. ‘This very early report is a step along that road.’ However, Tew highlights that questions remain, including where else in the body they might have effects.

Similarly, Susan Daniel, from Cornell University in Ithaca, New York, says the approach uses polymer chemistry to tackle the hard problem of how to broadly neutralise viruses ‘cleverly’. Daniel, who studies the chemical kinetics of how viruses bind to cells, highlights this proof-of-concept work is done in well-controlled laboratory model systems. ‘One challenge will be to assess its efficacy in whole animals,’ she stresses, using more realistic virus infection conditions.

The ‘ninja polymer’ antibacterial technology serves as a good example of how much development is needed. Today, five years after first describing them, IBN and IBM are still working on improvements for their use in surgical scrubs or handwashes and drugs. And even a company as large as IBM can’t do the development on its own, Hedrick adds. ‘IBM is not in the business of clinical trials, but we are currently seeking partners to advance this technology including academic collaborations and pharma companies,’ he says.

IBM and IBN have already found academic partners to test the antivirus polymer in animals, Yang reveals. They’re doing tests against herpes with University of Illinois at Chicago researchers, and on hepatitis B with the National University Hospital in Singapore. Animal tests are also helping explore potential difficulties that come in transporting large molecule drugs around patients’ bodies. The bulky polymers can’t move from the gut into the blood like smaller drug molecules do, so would need to be injected straight into the bloodstream. And then, when in our bodies, they often don’t spread out evenly.

‘Based on preliminary data we see consistently high content in the liver, so this brings hope that it should be useful for hepatitis viruses,’ Yang says. ‘We also plan to design the polymer in such a way that we can target specific organs and tissues.’ The scientists are also doing more cell-based tests to see whether their antivirus polymers can fight the growing Zika threat, Yang adds.